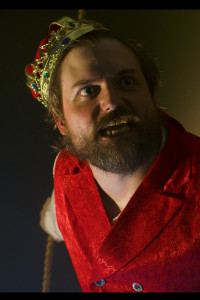 There is plenty to satirize in today’s political landscape, and one filmmaker accepted that mission under the most challenging circumstances he could have imagined: strapped for cash and in the midst of citywide lockdown. The Scarlet Pirate, a new feature comedy film created by Chicago-based writer/director Jon Silver and ShowPup Productions, will be kicking off a series of summer screenings with a single showing at The Music Box Garden on Sunday August 15th at 7:30pm. Admission is free and seating is first come, first served.

The political satire was shot 100% during the pandemic last year, making use of new safety techniques and digital filmmaking technology.

Here is your first look at The Scarlet Pirate:

This wacky pirate film is a feature-length comedy, lampooning tyrants and inept leaders. The story follows a young hero, Jimmy, who is the new face onboard the misfit pirate ship “Scarlet Pachyderm.” After a lucky triumph in battle, the villainous Captain Darby takes the captured Duchess Gwenivere prisoner and declares himself “Pirate King.” Jimmy and various crew must choose between the riches of a pirate career or following their moral compass.

Powering Through the Pandemic

The greatest challenge by far for Silver and his squad was adapting to the COVID-19 restrictions in order to shoot safely. Originally planned for March of 2020, these filmmakers had to adapt quickly to construct an impressive pirate set in a small basement office, instead of in the larger production studio as planned. The production used 60% recycled materials, props and costumes all while masking and social distancing between takes.

As part of a statement, Silver continued, “Through satire, we aim to entertain but also lampoon the dangerous policies of authoritarian governments and corporate greed.” Silver hopes viewers and members of the Chicago improv community find his film humorous and entertaining, but he also hopes the healing power of comedy resonates with audiences.

After several summer screenings, ‘The Scarlet Pirate’ will greatly expand its digital streaming distribution this fall. Follow this film at showpup.com and on social media as its journey continues throughout the year.