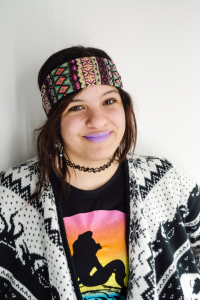 Chicago filmmaker Ayesha Abouelazm, who has two shorts about gender and cultural bias, is turning one of her short films, THE GIRL IN THE BLUE BRA, into a feature. Right now, she is finalizing a new script, in hopes of filming in Summer 2021. Most of the film will be shot in Chicago, will exteriors in either Egypt or Morocco.

THE GIRL IN THE BLUE BRA was shot in 2016 and was featured in 25 festivals, premiering at the 6th Delhi International Film Festival. As an Egyptian-American, Ayesha resonated with an event at the 2011 Egyptian Revolution, where soldiers ripped a woman’s dress, exposing her blue bra. She became a silent symbol for the nation. “I was glued to the TV,” Ayesha shares.

Take a look at the trailer for the short film THE GIRL IN THE BLUE BRA:

This incident at the Egyptian Revolution sparked curiosity and ultimately led her to write a story about the officer and the women in the blue bra.

The woman’s name was never divulged for fear of safety and Ayesha spent a month trying to identify her to hear her story. “In researching this event, I had to step back from my Westernized way of thinking by freeing my mind and getting rid of judgment as I explored gender roles in the Middle East,” Ayesha shared.

With her brother onboard as the writer, they are further developing a profound moment into a bigger piece about Arab culture and people. The original short was filmed in Arabic, but the feature will be in English.

“We want to humanize these characters,” Ayesha shares, “Arabs are either nice and holy, which is B.S., or these women-hungry men. We’re not flavored. Western audiences can watch the Arab characters who are not perfect, they are human beings.”