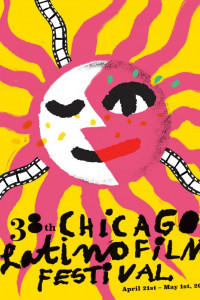 The Festival, overall, will present 50 features and 36 shorts from all over Latin America, Spain, Portugal and the United States, April 21st-May 1st. The Festival will once again adopt a hybrid format with in-person screenings at the Landmark Century Center, 2828 N. Clark St., several Drive-In presentations at ChiTown Movies, 2343 S. Throop St., and with virtual screenings via Eventive accessible to residents of Illinois and the Midwest states of Minnesota, Iowa, Wisconsin, Michigan and Indiana.

The Chicago-based Mexican playwright and director Roma Díaz (founder of the Tecolote Theater Company) makes his fiction feature debut alongside Enrique Gaona, Jr. with Bye Bye Chicago, the compassionate, deeply moving story about the friendship between an aging, dying Mexican immigrant and a young Colombian college student. Miguel left Mexico at a young age, giving up his passion for music and singing. Now he is alone, without family, friends or money. Dalia, the college student, and neighbor, lends more than a sympathetic ear to his anecdotes and reflections; she encourages him to reconnect with friends and family as he faces death. Bye Bye Chicago will have an in-person screening at the Landmark Century Center, Sunday May 1st at 3:45 p.m. and will be available for streaming April 27th-May 1st.

Here is your first look at Bye Bye Chicago…

CLFF remains a non-competitive festival. However, since 1993, the public has had the opportunity to vote for their favorite film in several categories and award them with the Audience Choice Award. The winner will be announced on May 4.

The Festival will also be presenting a series of pre-recorded and live conversations with select filmmakers as part of their program. The pre-recorded interviews, in English and Spanish with English subtitles, with the following filmmakers will play right after their respective film: director Marí Alessandrini (Zahorí); directors Silvina Schnicer and Ulises Porra (Carajita); director Celina Escher (Fly So Far); director Douglas Pedro Sánchez (The Last Tour); and director Nico Manzano (Me and the Beasts).

Live interviews are scheduled to stream on the Festival’s Facebook page; guests, dates and times will be announced on the page close to the Festival.

Tickets for screenings at the Drive-in (maximum 6 passengers) are: general, $55 per car; ILCC members, $44 per car. All ticketing fees are included in the price. Tickets must be purchased in advance. No in-person sales at the Drive-in.