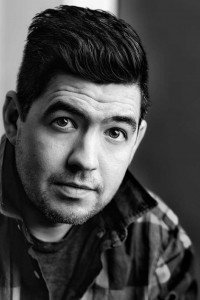 Will Smith, DJ Jazzy Jeff, arachnophobia, and the best board game ever! A Detroit native now in Chicago, The Colonie’s Editor Joe Clear stopped by this week to play Five Questions with SCREEN, let’s get right to it…

JOE: Will Smith. In college I got to intern on the film ALI. After the shoot wrapped, Will threw a party for the Chicago crew. On the turn tables, DJ Jazzy Jeff. After a great meal some drinks and dancing, Will was walking around taking the time to talking to every crew member, even the intern. It was only a five-minute conversation but it’s a memory I won’t forget. Probably because my friend’s girlfriend gave him a pat on the backside as he walked away.

Quick look at the trailer for that film Joe interned on… ALI, featuring Oscar nominee Will Smith…

SCREEN: What activity are you most looking forward to once the country goes “back to normal,” hopefully later this year?

JOE: Playing soccer and going to the movies. I love playing soccer, it’s a great game. My team is the oldest in the league so we don’t win a lot anymore, but we have fun and I can still keep up. Having beers after the game with my teammates I’ve missed. Nothing better than taking the kids to a Marvel Blockbuster or my wife to see a film everyone is talking about.

JOE: Well, I used to be afraid of spiders, but I have a wife and two daughters and someone needs to get the spider out of the house so I’m not afraid of those anymore. Instead, I give them names so I don’t have to kill them and when my daughter says “Steve” is back, I know what I need to do. I’m too in love with life to fear anything. Good, bad, it’s all about the journey.

SCREEN: Your favorite board game? Why do you love it?

JOE: Sorry. It’s always been a favorite in my house. It’s kind of a mile tone as the kids grew up. Meaning I don’t have to play Chutes and Ladders or Candy Land anymore. It’s just a good game that everyone can enjoy and Monopoly takes too long to play.

For a trip down nostalgia lane, here is a refresher on Joe’s favorite board game, Sorry!

JOE: In high school, I was hired to go door-to-door and drop off promotional flyers. It was August and miserably hot. You get dropped in a neighborhood that you don’t know. And start rubber banding the flyers to anything you can find because you can’t use the mailbox. You eventually try to find easier and faster ways to leave the flyer that won’t get you in trouble. Don’t forget to drop the rubber band because they say they will count how many flyers and bands you have left at the end but they don’t. Once you hit all the houses in one neighborhood and you think you’re done, they drive you to another and you start all over. They asked if I wanted to come back next weekend and I said no.

JOE: I guess OUTLANDER and it’s only embarrassing because it’s based off a bunch or romance novels but it’s a good show. Historical fiction with a sprinkle of sify and lots of sex. Whats wrong with that. I do recommend that you watch it with your spouse or partner because, well I’ll let you figure it out.

To check out Joe’s editorial work and more from The Colonie, click right here.