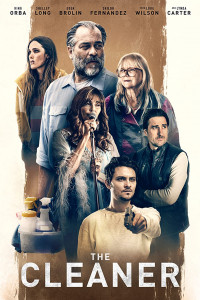 Indie darling The Cleaner is enjoying a successful run on digital platforms worldwide, boasting an all-star cast and production team, and a taut and moving emotional drama. The cast is highlighted by Royal Tenenbaums and Old School star Luke Wilson, also an Executive Producer on this film, and Chicago movie fans will appreciate the bounty of Windy City ties to this feature, let’s take a look…

While The Cleaner was shot in Los Angeles, many of the cast and crew have deep roots in Chicago. Director Erin Elders, producers Chris Charles, John W. Bosher, and Kate Gradyare all alumni of Columbia College Chicago. Co-producer/cinematographer Jeff Tomcho, music supervisor Kevin Merlet, art director Tony Swansey, gaffer William E. Coleman, 1st assistant camera Matt Borek, Steadicam operator Brennan Maxwell, and boom operator Stephen Harrod are also alumni of the heralded film school. “On set, we joked that it was an unofficial Columbia College reunion,” producer Chris Charles shared with SCREEN. “Some of us made our first student films together at Columbia, so it was very meaningful to reunite and make a movie 15 years later.”

Here is your first look at The Cleaner and its sterling cast, led by the original Wonder Woman Lynda Carter, Soleil Moon Frye, King Orba, Shelley Long, and Luke Wilson…

As for the central character of the film, “Buck Enderly has settled comfortably into life’s disappointments,” director Erin Elders shared with SCREEN. “He’s a former RV Salesman who now lives with his mother, supporting the two of them by running her old house cleaning business. As the story unfolds, Buck sets out to find a client’s missing son, which injects some excitement into his life and gives him perspective on his own relationships.”

“The backbone of the film is the relationship between Buck and his mother Sharon, played by Shelley Long,” Elders declared to SCREEN. “They have an incredibly close and symbiotic dynamic that makes many stops along the emotional spectrum every single day. It’s a lot of fun to watch them together on screen and I hope it’s a relationship that resonates with audiences. One of the things we wanted to explore in the film are the ways in which we’re all shaped by our family histories and trauma.”

Bringing a Hollywood heavyweight the likes of Luke Wilson to a project is no small feat. “Co-writer/star King Orba has known and collaborated with Luke for many years,” Throughline Films partner and Chicago native Chris Charles shared with SCREEN. “The two of them wanted to do another project together, so we discussed the possibility of casting Luke early on in the development process. We knew the material had to be strong for Luke to sign on, so we spent a lot of time revising the script before making an offer. Fortunately, Luke liked it and had a window of availability during our shoot. In fact, he liked the project enough to join the team as an executive producer!”

The Cleaner highlights a packed slate from the fine folks at Midwest-based investment engine Chicago Media Angels. As for what drew CMA to join the production, Associate Producer and CMA Associate Mark Glassgow shared with SCREEN that “The Cleaner to me is a film about stages of life and aging, and it’s really emotionally moving to me. There is a dichotomy of younger characters and older characters, and as younger characters look to the older for wisdom, older characters look for energy and the exuberance of being young. The protagonist Buck (played by King Orba) gives a beautiful performance splitting the difference as a middle aged, Han Solo type- but 10 years past his prime.  Buck is trying to establish himself as a reliable caretaker for his ailing mother, while also attempting to maintain his youthful independence. It really underscores the rest of the ensemble as they begin their adult life or wind it down and reflect on how they’ve spent their years.”

The Cleaner is now available on digital and on-demand on all the major platforms for your holiday viewing pleasure.