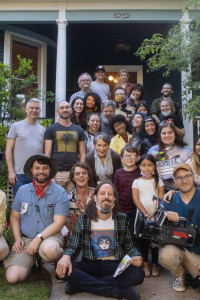 Production on Michael Glover Smith’s fourth feature film, RELATIVE, wrapped today after two weeks of shooting in Chicago and the near-north suburbs. According to Smith, it was the “smoothest” production experience he’s ever had: ”After doing this four times, I feel like I’m finally starting to figure it all out,” Smith told SCREEN. “This was was the best cast and crew I’ve ever had the pleasure to work with. Everyone brought their A-game.”

“The amount of talent and kindness on set was incredible,” actor and producer Clare Cooney told SCREEN. “The cast and crew became extremely close within a matter of days, and we’re all nostalgic for this shoot already. It’s bittersweet to say goodbye to our little film family, but I can’t wait to see it all come together in post.”

Enjoy some joyous exclusive photos from the set of Relative…

Smith praised the cast, in particular, for being able to capture “lightning in a bottle” during the tightly scheduled shoot: “It was a dream come true to work with Chicago theater legends like Wendy Robie and Fran Guinan. I’m really happy that I was able to create a space for them to play in and that it ended up being a satisfying creative experience for them.”

Smith also credits the afore-mentioned Cooney, who wore three hats on the film as actress, producer and casting director: “This was the third time Clare and I have worked together and it is our deepest collaboration yet. I thought she was really funny in RENDEZVOUS IN CHICAGO but I wanted to ask her to do something very different here. I asked her to hit a lot of different emotional beats this time and even go to a scary place in one scene. I think she is phenomenal in this.”

Originally set to shoot in May 2020 but postponed for a year due to the COVID-19 pandemic, the comedy/drama tells the story of a weekend family get-together revolving around a college graduation party. Post-production is scheduled through fall with Eric Marsh (Orders) set to edit, Cait Rappel (Veiled Tractate) composing the underscore and music supervising, and Chicago’s NoiseFloor handling post-sound. Expect a Relative World Premiere in 2022.

In the meantime, you can enjoy Glover Smith’s latest festival-winning offering, Rendezvous in Chicago, on Amazon Prime, courtesy of the film’s distribution partner, Cow Lamp Films. The feature will receive its television premiere via PBS Wisconsin’s Director’s Cut on Friday, July 9. And it’s worth mentioning that Chicago Sun-Times critic Richard Roeper recommends you take the time to watch Rendezvous, deeming it “exhilaratingly entertaining” in his rave review of the film. Here’s a quick preview:

Check back here at SCREEN for updates as Michael Glover Smith and Relative begins its festival run in the new year.