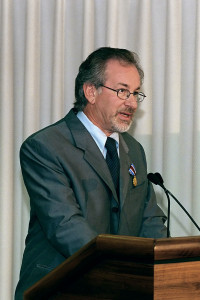 Jewish Story Partners (JSP), a new Los Angeles-based film foundation, has launched with an ambitious vision with $2,000,000 in funding, and will soon announce its first round of grantees. Jewish Story Partners stimulates and supports the highest caliber independent films that utilize fresh, nuanced perspectives to tell stories about a diverse spectrum of Jewish experiences, histories, and cultures. Jewish Story Partners responds to the glaring gap in funding as well as the pressing need to expand the range of stories reflecting Jewish lives.

“We’re thrilled to create something that is both additive to the independent film community as well as critical to the Jewish arts and culture landscape. With the support of our incredible partners, Righteous Persons Foundation, Maimonides Fund, and Jim Joseph Foundation, we can accelerate the production and impact of excellent independent films,” said co-directors Roberta Grossman and Caroline Libresco.

Marta Kauffman, veteran writer, producer, and showrunner (Friends, Grace and Frankie) and Jewish Story Partners Board member, said: “Storytelling is crucial so that we may understand each other. Jewish stories are important, not only so others may understand us, but so we may understand ourselves. As a member of the inaugural board of directors of Jewish Story Partners, I’m looking forward to helping create a stable and lasting funding organization that can fill the funding gap for independent filmmakers who want to tell a Jewish story.”

In 2021, the organization will provide $500,000 in grants to US-based feature length documentaries––to be selected by jury panels––establishing JSP as a leading film grantor. In the coming years, JSP has ambitious plans to significantly increase its funding and expand eligibility to encompass international filmmakers and fiction projects. The inaugural round of grantees are soon to be announced and submissions are now open for a second funding round, with applications due July 1, 2021. Filmmakers may learn more at jewishstorypartners.org.

In addition to financial support at critical junctures in the development, production, post production, and release of film projects, JSP will provide a continuum of support to help unlock each film’s creative vision, accelerate completion, and maximize audience impact.

Initial funding for JSP is provided by the Righteous Persons Foundation, which previously supported The Lynn and Jules Kroll Fund for Jewish Documentary Film, housed in the now-shuttered Foundation for Jewish Culture. A matching gift was received from lead partner Maimonides Fund, with additional support from Jim Joseph Foundation.

In a joint statement, Kate Capshaw and Steven Spielberg commented: “There is nothing like storytelling to foster connections and help us understand life’s deepest truths. We are especially proud to help establish this initiative—which will make visible a fuller range of Jewish voices, identities, experiences, and perspectives—at a time when social divisions run painfully deep and mainstream depictions too often fail to reflect the Jewish community in all its complexity. We hope that JSP projects will long be a source of meaning within the Jewish community and beyond.”

“We believe strongly in the power of storytelling to shape how people see the world and themselves,” said Mark Charendoff, President of Maimonides Fund. “We are excited to support JSP’s mission of getting more films out there that offer surprising and nuanced perspectives on Jewish life, and showcase the richness and diversity of the Jewish experience.”

“Education and connection are the core engine driving everything we support at the Jim Joseph Foundation,” said Barry Finestone, President and CEO of Jim Joseph Foundation. “We’re proud to support Jewish Story Partners because we view film as an electric, yet under-utilized conduit for Jewish education—translating knowledge into a medium that resonates with the next generation.”

South Carolina-based Partner and Chief Strategy Officer at Uprise and Jewish Story Partners Board member Ginna Green, said, “The range of films championed by Jewish Story Partners will expand our collective awareness of what it means to be Jewish today, and in the process help build a world where we all belong, no matter our religion, where we come from, or what we look like.”