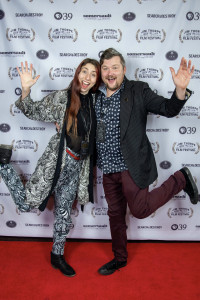 Live and in-person film festivals are back! Located in a quaint Victorian town in the Pocono Mountains of Eastern Pennsylvania, The Jim Thorpe Independent Film Festival (JTIFF) recently wrapped its 4th annual event at the historic Mauch Chunk Opera House. Following CDC guidelines, the founders, Todd Morris & Jocelyn O’Neil, held a live and in-person only festival after being shut down last year due to COVID-19 pandemic. In four days and nights, JTIFF screened 90 films of every genre and description from all over the world. Audience members and filmmakers, many of whom had traveled crosscountry to attend, maintained mask and social distancing protocols to once again experience films on the big screen with a live audience, along with Director Q&A’s, live music performances, and the lavish Filmmakers’ Gala at the sprawling Stabin Museum.

Although JTIFF is located in Eastern Pennsylvania, it has deep roots in the Midwest, thanks to its Co-Founder, Jocelyn O’Neil, pictured here with co-founder Todd Morris. Born and raised in East Chicago, O’Neil graduated from Indiana University, then began her acting career in the thriving Chicago theatre and film scene before relocating to New York. Now a co-director & programmer at JTIFF, she strives to bring a bit of the heartland to her Pennsylvania festival by curating works by filmmakers who make their art in the Midwest.

For example, this year’s slate of films includes the dramatic and timely short, Long Ride Home, shot in Chicago and directed by Dame Pierre, and produced by fellow Chicagoans Mary Kay Cook, Mike Ware, and Mike McNamara. The irreverent and visually absurdist comedy feature, Lake Michigan Monster, directed by and starring Milwaukee native, Ryland Brickson Cole Tews, who presented his wildly inventive film in person along with his two beer-swilling producers, James Stoeffel and Louis Schultz. Also, rounding out the JTIFF jury, was St. Louis resident Robert Herrera, a Sundance fellow and a Will & Jada Smith Foundation grant recipient who is currently developing two different feature projects – a narrative and a documentary.

JTIFF will return for its 5th annual festival next April 21st through the 24th, 2022.