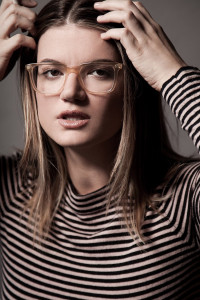 Here’s some eggnog for your holiday as the Disney-owned Freeform has a pilot entitled SINGLE DRUNK FEMALE currently filming in Chicago. The half-hour pilot, produced by 20th Television, is being directed by Leslye Headland (pictured here), best known for creating the Netflix series RUSSIAN DOLL with Amy Poehler and Natasha Lyonne. The cast is headlined by YOUR HONOR star Sofia Black-D’Elia and THE BREAKFAST CLUB alum Ally Sheedy. Shooting began last Monday, December 7th, in Chicago and is expected to wrap this Thursday evening.

SINGLE DRUNK FEMALE follows a 28-year-old irreverent alcoholic Samantha Fink, played by Black-D’Elia, who, after a spectacularly embarrassing public breakdown, is forced to move back home with her overbearing mother to sober up and avoid jail time. But when her childhood best friend reveals surprising news, Samantha realizes she can no longer qualify as a party girl – she’s a walking disaster.

Ally Sheedy plays Carol, Samantha’s overbearing but absent parent. Rebecca Henderson (who worked with director Leslye Headland on RUSSIAN DOLL) plays Olivia, a brilliant melancholic lesbian who works as one of the greeters at AA. Sasha Compère (LOVE LIFE) is Brit, Samantha’s smart, loyal and always well-put-together ex-BFF. Lily Mae Harrington (SOME FREAKS) plays Felicia, Samantha’s fun and fearless drinking companion who is always counting down the days until Samantha is out of rehab so they can meet up at their favorite local bar.

On the Chicago Side

The production team for this Freeform pilot is being led by veteran Chicago line producer Christina Varotsis. Christina’s recent television productions include the Chicago units for the long-running Showtime Emmy-nominated series SHAMELESS, as well as the CW superhero thriller BATWOMAN. Varotsis has also produced the pilots for Philip K. Dick’s ELECTRIC DREAMS for Sony/Amazon and LOVECRAFT COUNTRY for HBO.

Other Chicago veterans on the project include Production Coordinator Margaret Orlando and Production Supervisor Margaret Thomas. Keslow Camera Chicago is providing the gear for this shoot.

Rounding Out the Team

Speaking of camera, the Director of Photography for SINGLE DRUNK FEMALE is Brian Burgoyne. Burgoyne is best known for his work as cinematographer of the Oscar-nominated and critically acclaimed comedy THE BIG SICK, starring Kumail Nanjiani. On the television side, Burgoyne mostly recently shot the Lionsgate series for the dearly departed Quibi, SWIMMING WITH SHARKS, starring Kathleen Robertson.

SINGLE DRUNK FEMALE was written by Simone Finch, who has worked on THE CONNORS, with GIRLS co-showrunner Jenni Konner and FRESH OFF THE BOAT director Phil Traill executive producing.

Sources tell SCREEN that hopes are very high for this pilot to receive that coveted series order from the Disney-owned, younger-skewing Freeform network. More importantly, sources also tell SCREEN the full series is expected to film in Chicago, should that greenlight be received. Much can change in the new year, but Chicagoans should certainly add SINGLE DRUNK FEMALE to their production watchlist for 2021.