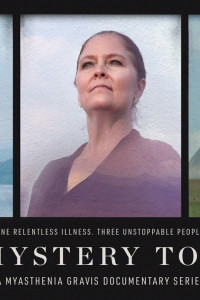 The filmmakers behind “A Mystery to Me,” a new documentary series that aims to raise awareness of the rare neuromuscular disease myasthenia gravis (MG), are very proud to detail their innovative production approach behind the heartfelt project. Following last month’s debut as part of the Chicago International Film Festival, the series will premiere on MG-United.com, an online resource for people affected by MG.

Here is a preview of the series…

A Mystery To Me | Teaser from Sarofsky on Vimeo.

Sarofsky Pictures is also releasing a new set of “Making Of” videos, where Ben and producers Erin Sarofsky, Caryn Capotosto and Karen Carter reveal challenges they faced researching MG, understanding its effects, and filming their subjects in the age of the COVID-19 pandemic.

By their accounts, what seemed to be a crushing setback in March led to an extraordinary upside in the finished subject matter. “We were about to start filming our subjects, and the pandemic shut everything down,” said Erin Sarofsky, Executive Creative Director, “And what could have decimated my team actually drew us closer together and kept us going.”

Ben agreed: “The digital forum in which we had to work created some obvious distance between all of us, but that physical distance ultimately also gave us an ability to be quieter, closer, and create more intimate moments on screen.”

From project start to finish, here are more of the insights shared by some of the remarkable talents behind “A Mystery to Me.”

The team began researching possible subjects for their film in mid-2019. Karen describes the process of scouring social media and attending MG Walk events across the U.S., along with Ben, to identify and interview subjects. “We were looking for three individuals with MG who had a story that resonated with us and that we thought would resonate with a broader audience.” Ben confirmed.

“Ben was relentless in his pursuit to find exactly the right subjects to speak to this community,” Erin added.

Rewarding their diligence, the powerful stories of three unstoppable people – fitness instructor Vanetta, firefighter Glenn and dance school owner Teresa – and their loved ones, come to life vibrantly in “A Mystery to Me.” In Karen’s words, “What they each have is this generosity. They were all into this project because they want to help other people in the MG community.”

Even before COVID concerns prompted nationwide production shut-downs, Ben invested as much time as possible interviewing his subjects via Zoom and getting to know them. Through those exchanges, he observed that when a crew is not present, people can be much more open.

When it suddenly became clear that the crew could not travel to film their subjects in person, those meaningful online interactions helped spur everyone on. “There was a point where we decided, we’re going to make it work,” Ben confirmed. While his Making Of interview also recounts the team’s problem-solving approach, the ultimate decision was to tell these stories using a mixture of archival and self-shot footage, with one more key element: “A third really necessary component was going to be sending a camera that would film principal photography remotely,” Ben said.

Addressing their approach to filming principal photography 100% remotely, Caryn praised award-winning cinematographer David Bolen. “David has taught us all so much about production in a remote setting,” she said.

For the archival and self-shot footage, the film’s subjects were encouraged to share whatever footage possible from their histories, and also, to use iPhones to capture new life events as they took place. Per Ben’s notes and David’s recommendations, each subject was also provided with a Sony Alpha A6600 Mirrorless Digital Camera as part of a kit. Based on their regular conversations, Ben was able to direct the subjects, while David instructed them on scene composition and lighting – while also operating the cameras remotely, in tandem with a remote-controlled sound recording system operated by Richard Walters.

Reflecting on the overall experience, Ben shared some thoughtful takeaways. “The journeys of these three incredible individuals are, like all of ours are, about confronting the sometimes intangible obstacles in life that are the hardest to surmount, and finding the emotional strength to not just move around them, but to understand why they exist on our path, and what lessons we can learn from them.

In the Making Of videos, each of these filmmakers comments on which story resonates with them the most, while providing more fascinating behind-the-scenes details. In her comments, Karen also sums up some of the director’s most auspicious contributions. “Ben, in his interviews, can take people down a little road, to get some sort of emotion,” she said, adding: “And that is his gift.”

Meanwhile, Caryn addressed the project’s ambitious educational aims. “We know we have a home for the films on MG-United.com, but beyond that, our hope as documentary filmmakers is that these films have an impact that resonates beyond the MG community.”

Speaking for the filmmakers, Erin shared these parting thoughts: “To create a piece like this is to ultimately bring visibility to everybody struggling with MG. This will help them be able to communicate what they’re going through.”

argenx is a global immunology company and the sponsor of “A Mystery To Me.” To watch the film and learn more about MG, please visit https://www.mg-united.com.