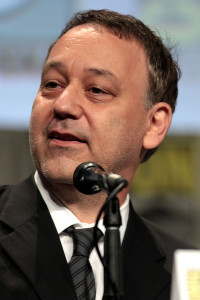 There is a major movie project heading to Chicago’s Cinespace Studios, and among the producers leading the team is a genre blockbuster legend. Sam Raimi, director of the Spider-Man trilogy and the cult horror Evil Dead franchise, will be among the notable producers on a new genre thriller for Paramount titled Be My Eyes. Sources tell SCREEN this movie will be headquartered at Chicago’s Cinespace Studios and filming is expected to begin later this year. Many more details in the months ahead, but SCREEN can confirm the thriller will be helmed by Norwegian director Lars Klevberg, the filmmaker behind Child’s Play and Polaroid.

Be My Eyes follows a law student who volunteers to receive anonymous video calls from blind people through an App to help them ‘see’ and do simple tasks. One night, she is pulled into a race against time when she gets a terrifying call from a blind woman in the midst of an abduction.

While you are likely well-versed in the resume of Sam Raimi, the name Lars Klevberg might be less familiar. Klevberg is known for directing the 2019 mainstream horror remake Child’s Play, as well as the thriller feature Polaroid, which began as a short film made in 2015. You can enjoy the chilling short right here…

Writing credits for Be My Eyes go to Jud Cremata and Pet Sematary scribe Jeff Buhler. Among the producers joining Raimi is Romel Adam, whose producer credits include The Grudge and the currently-filming Evil Dead Rise, which Adam is executive producing with Raimi and legendary Evil Dead frontman Bruce Campbell.

Sam Raimi Leads the Producers for Be My Eyes

If you need a refresher, Sam Raimi is best known for creating the cult horror Evil Dead series, and directing the Tobey Maguire-led Spider-Man trilogy (2002–2007). He also directed the 1990 superhero film Darkman, the 1998 neo-noir crime-thriller A Simple Plan, the 2009 supernatural horror film Drag Me to Hell, and the 2013 Disney fantasy film Oz the Great and Powerful, starring Johnny Depp. His latest directorial blockbluster for Marvel Studios Doctor Strange in the Multiverse of Madness is currently in post-production and is slated for a Spring 2022 release.

Here is a quick trip back to classic cult horror with the trailer of Raimi’s 1981 Evil Dead:

It goes without saying there are many more updates ahead for this feature. Check back here at SCREEN for cast announcements, shooting dates, locations, release dates, and more as Be My Eyes heads into production later this year.