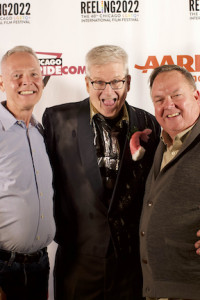 The Reeling Film Festival launched its 2022 program with the US premiere of The Tiny Shrimps Strike Back at the Music Box Theatre on September 22. Now on its 40th annual run, the LGBTQ+ International cinematic celebration enhanced the evening with a Q&A featuring director Cédric Le Gallo and an after-party emceed by award-winning actress Honey West.

The festival continues through October 6 with screenings at Music Box, Landmark’s Century Centre and Chicago Filmmakers.

Tiny Shrimps Strike Back is a follow-up to 2019’s The Shiny Shrimps, a film about a “rag tag rainbow water polo team” from France that “hilariously broke down the walls of homophobia” when it played the festival in 2019. Strike Back joins the team three years later as it heads to the Gay Games in Tokyo but gets stranded in Russia, where a “crazy series of adventures mixed with musical comedy” ensue.

Upcoming films include the Tales from the Queerside Shorts Program on Friday, September 30, and a trio of episodes from the Dyke Delicious Reunion series over the weekend. For more information, click here.

Be sure to check back here at SCREEN Magazine for all the latest from the festival circuit in Chicago and between the coasts. You can also click right here to subscribe to our weekly email newsletter.