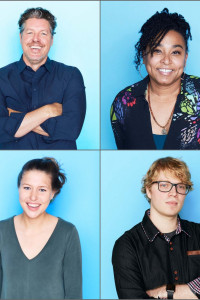 Quriosity Productions is taking in the sun as the company expands its footprint in Los Angeles while simultaneously staffing up in its hometown of Chicago. News of the integrated production company’s new hires and promotions, led by the naming of veteran producer Mark Conley as West Coast EP and Chicago agency vet Margie Ayala as Senior Producer, was made by Founder and EP Qadree Holmes.

In addition to Conley and Ayala’s joining, Quriosity has brought on Matt Tarr as Lead Editor, based out of its Chicago office (while working remotely for clients everywhere), and promoted Kate Hamamoto to the role of Producer. And finally, the company has tapped new representation, naming the duo of Lisa G & Company Represents and Blush Creative – a.k.a. Lisa Giménez and Deirdre Rymer Rivard – to handle East and West Coast marketing and sales for the studio.

The hire of Conley, a veteran producer with extensive freelance credits, represents a new position for Quriosity, Holmes says: “We’ve worked with Mark increasingly over the last two years, and as our presence on the West Coast grew, we knew he was the right fit for us. He’s joining in response to the growing demands for our talent and our approach to production and post.”

A Chicago native who’s worked both on staff as production companies such as Strato Films and Whiskey Tango Films, Conley’s resume includes not only commercials but feature work as well. “Quriosity has definitely taken root here in L.A., and it says a lot about their commitment to the marketplace that they’ve brought me on,” Conley explains. “Q and I are looking forward to bringing in a wider range of projects and brands, as well as introducing the company to an array of new talent. It’s a major investment that’s already begun to pay off.”

Helping manage this payoff is Ayala, who comes to Quriosity as both a former client, from her days on the agency side, and a former peer, from her time running her own production company. Formerly at DDB and later at We Are Unlimited, the McDonald’s agency, Ayala has worked both sides of the street and knows the commercial production and post scenes inside out. “On top of that, Margie and I have remained close friends throughout the years,” Holmes points out, “so this felt like a very natural fit for the new direction of Quriosity. And it’s an honor to have a woman of color on our team.”

Ayala believes her vast experience in the industry has been an asset, but admits that working with friends isn’t always the best move. “But this has been just a great experience,” she says enthusiastically. “We share the same energy, passion and work ethic, so I’ve really fit right in.”

Newly named Lead Editor Matt Tarr has worked at all of the major Chicago-based post production houses, and also spent time editing in-house at such agencies as FCB and DDB. In transitioning to a staff role at Quriosity, he’s looking forward to putting down some roots and working on a broad range of assignments. “I am looking forward to stepping into a role where I’ve got a stake in a company’s success, and a little corner of the industry that I can call my own,” he says. “It’ll be a welcome change from the freelance life I’ve been leading lately.”

Hamamoto Moving On Up

Hamamoto has been with Quriosity for four years, and has the longest perspective on the company’s evolution than any of the new hires. She says one of the biggest changes she’s seen during this time is in the breadth and scope of work the studio is turning out. “We’re getting to tackle lots of bigger and better projects, across different categories of the business, than in the past,” she observes.

One thing that’s impressed her is how Quriosity and Holmes have taken leadership roles in the efforts to promote minority talent and support minority-owned production houses. “We’ve been getting a lot of exposure because of this,” she notes, “and what’s great is that Q has been doing this for years; he knows what’s gone into this, and no one can beat around the bush with him. So he’s been able to take advantage of this and help some of the smaller minority companies. It’s been encouraging to watch this movement bloom and continue to grow.”

Holmes believes the new representation he’s secured on the East and West Coasts – the company continues to be repped by Sarah Gitersonke in the Midwest and Julie Koellner in the Southwest – will boost its expansion efforts. “Lisa and Dee have definitely brought in a sense of clarity when it comes to increasing our presence on the coasts,” he says. “They have a keen sense of how clients are looking for new, fresh faces with which to partner. For sure, diversity has been a topic of conversation with many brands. But we’re excited to connect quality, high-level production with the desire of advertisers to engage more with minority-owned companies and minority directors, photographers, and editors.”

“Quriosity has a really unique offering,” adds Giménez, “and much of that is driven by Q’s point of view. He’s been extremely successful, even before the industry’s push for greater diversity, and there are some talents at his company that we’re really enamored with. They’re high caliber directors who can work at any level; what they really need are opportunities.”

There’s also a simpatico when it comes to the vibe: “Q’s brand, and what it stands for, really resonates with us,” says Rivard. “They’ve got a kick-ass attitude and are really giving one hundred and fifty percent on everything. It’s an exciting direction they’re going in, and we want to be part of that.”

The studio has been firing on all cylinders of late, Holmes notes, with a mix of pride and gratification. “Despite the tumultuous nature of working during a pandemic, we’ve been going gangbusters. Just within the last year, we’ve been shooting all over: Atlanta, Nashville, Vancouver, London, the Dominican Republic, San Francisco, Louisville and of course, L.A. As the person who founded this company, it’s been amazing to see how it’s grown. I credit this to our dedicated staff, our roster of artists and the level of collaboration we’ve been able to achieve.”

As Quriosity expands, Holmes is taking pains to maintain the brand’s culture and reputation. How would he describe it? “Have you met me,” he asks incredulously. “We’ve got a dreadlocked Rasta running things!” More seriously, he adds, “We understand how to speak to a multitude of voices, whether that’s talent, creatives, brands or audiences. And we’re not shy about making sure the marketplace we’re working in is fair and equitable. Through all of this growth, we’ve remained true to our slogan: Minority owned. Always diverse.”