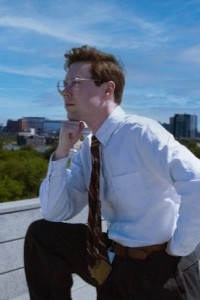 Prysm Studios continues to build its talented team in Chicago. In addition to a writing career that includes a stint at The Onion, Chris Cady is a seven year post-production industry veteran, having most recently headed up the social media department for Utopic in River North. As a semi-satirical special to SCREEN, Chris also wrote this announcement about himself...

Prysm Studios is beyond excited to announce the addition of a major social media talent, Chris Cady, to its already superlative team.

“Chris’ industry experience, creativity, positive attitude, and commitment to making top-notch, surprising digital content is exactly what we were looking for in a candidate for this role,” Prysm founder Ryan Gilbert definitely said. “Chris is also much taller and conventionally attractive than he appears in photos.”

In addition to being, like, no doubt the best thing to ever happen to Prysm as a company, Cady’s new job will also entail performing the same role for Resolution Studios, the storied studio housed in the same West Town facility. This dual role helps further tighten the collaborative ties between the two companies, illustrating the “all under one roof” advantage that the various businesses at 2226 W. Walnut bring to the Chicago production community.

Okay. Back to the star of the show…

“It’s so exciting to work for two companies buzzing with as much creative vigor as Prysm and Resolution,” Chris said, handsomely. “I’m looking forward to harnessing some of that energy to shine a light on two of the biggest secrets in the Chicago film industry.”

For more from Chris and the fine folks at Prysm Studios, click right here.

Be sure to check back here at SCREEN Magazine for the latest from the Chicago and Midwest advertising community. You can also click right here to subscribe to our weekly email newsletter.