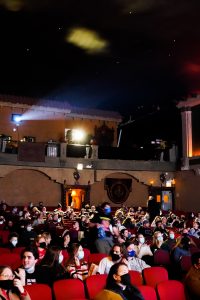 The Chicago Critics Film Festival returned to the Music Box Theatre for its seventh year, featuring a selection of the most sought-after and anticipated films of the year hand-picked by members of the Chicago Film Critics Association.

Over 1,000 vaccinated and masked film enthusiasts safely returned to the cinema the weekend of November 12-14 for exclusive screenings and special guests, marking another successful year for the festival.

Here are some choice photos from the festivities, courtesy of Hilltop Photo Company:

As one event wraps, the organization also confirms the return of the Chicago Critics Film Festival in 2022. The event will again feature one full week of screenings at Chicago’s historical Music Box Theatre, May 13-19, 2022.