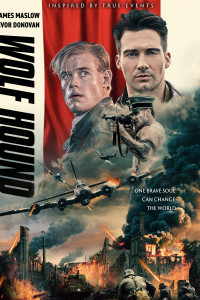 A Hollywood action thriller on an indie budget. That was the ambitious mission accomplished by director Michael B. Chait, VFX guru Ryan Urban, and their talented cast and crew. Wolf Hound is a Midwest-made World War II action film, primarily shot in the Detroit Metro area. Wolf Hound began as a low budget independent film – particularly for the genre – but after completion, it was picked up by Lionsgate and their Grindstone Entertainment Group for a “Hollywood” release that exceeded the filmmakers’ wildest dreams. The thriller recently wrapped up a U.S. theatrical run spanning 33 theaters nationwide, and is now available on Blu-ray and digital that are chock full of behind-the-scenes extras.

To celebrate the release and delve deeper into this ambitious project, we caught up with the film’s director Michael B. Chait and Visual Effects Supervisor and Co-Producer Ryan Urban..

Here’s what you can expect when you sit down at home to enjoy Wolf Hound. Featuring action sequences using vintage aircraft, this thrilling WWII epic shows how one man’s courage can change the world. On a recon mission over Germany, pilot David Holden is shot down along with a B-17 bomber. He lands near an airfield, where he learns the Germans are loading the U.S.-marked aircraft with a city-destroying super bomb that could help the Axis win the war. Now, Holden must evade search patrols and a vengeful Nazi soldier to rescue the captured crew and stop the doomsday plot.

The film stars James Maslow (Big Time Rush) and Trevor Donovan (90210) playing the lead hero and villain, respectively, along with a sizable, strong supporting cast mostly from the Midwest, namely Chicago and Detroit.

And here is your first look at Wolf Hound…

And now let’s talk with Michael and Ryan…

SCREEN: Michael and Ryan, thanks for stopping by! What would you say is most unique about Wolf Hound?

MICHAEL B. CHAIT: Technically, Wolf Hound is an indie film, but we had ambitious, studio-level goals. Wolf Hound features extensive aerial action sequences that amount to 45 minutes of the 2 hour 10 minute runtime. These scenes were filmed up in the sky with genuine WWII vintage aircraft under the coordination and safety instruction of Craig Hosking [who also served as Aerial Coordinator for Christopher Nolan’s Dunkirk]. In addition to these spectacular aerials, many ground action scenes feature larger than usual stunts for an indie film, incredible pyrotechnics, and lots of authentic WWII production value. Real planes and explosions were bolstered by the visual effects, which helped make the aerial and ground action sequences possible.

SCREEN: That’s so impressive that you used real planes. Which begs the question… how did visual effects fit into this movie if you film mostly with real planes?

MICHAEL B. CHAIT: We captured a lot of content in-camera, but we knew we were going to need the help of visual effects to help tell the story. The aircraft were all real – not a single fully CG plane exists in the movie – but all machine gun tracer fire, sparks, most smoke trails, damage, debris, fire, and many parts of the larger explosions were all digitally created and added in by the VFX team. Scale models were built and filmed to show the destruction of aircraft, but sophisticated VFX helped elevate them from really good scale model shots to really awesome realistic shots that matched the rest of the aerial footage. Some of the most extensive visual effects in the film can be seen when the planes are blowing up, breaking apart, or falling toward the ground after being destroyed. In fact, some sequences last only a few seconds but took several months to complete!

RYAN URBAN: I knew Mike was hesitant about VFX, so I advised him early on to take a look at one of his favorite films, The Rock. The chase through San Francisco had a lot of close-ups of the actors, with blown out backgrounds – which works sooo well! We should have a similar setup on Wolf Hound – no green screens and naturally blow out the backgrounds too. Not only for logistics but creatively, it spoke more to his aesthetic.

[Editor’s Note: The film ran all the visual effects through Turncoat Pictures, who completed over 400 VFX shots for the film. Ryan Urban’s VFX Team consisted primarily of his core team of artists and production at Turncoat Pictures, but it also included other companies located in Los Angeles, Vancouver, India and Nepal.]

SCREEN: How else were you able to ramp up the authenticity of this WWII thriller?

MICHAEL: By partnering with two Air Museums and WWII Reenactment groups, we were able to secure access to authentic WWII planes and uniforms. Key crew members specializing in aerial coordination and photography, stunts, and special and visual effects brought a level of studio-level polish to the indie film.

SCREEN: Talk about the importance of filming in the Midwest to you.

MICHAEL: Behind the scenes, Wolf Hound is also a “hometown hero” type of story. Most of the key crew hailed from the Midwest, attended Columbia College Chicago together, and sought to show how successful Midwest filmmaking can be.

SCREEN: Let’s talk about the extra special features for the Blu-ray and digital release!

RYAN: Mike and I were big fans of DVD special features growing up. They definitely fed our love for filmmaking. So we set out to make sure we created some special features other aspiring filmmakers would find interesting.

MICHAEL: The Blu-ray includes a commentary, visual effects featurette, deleted scenes, and a behind-the-scenes making of. The commentary shares humorous stories from the production and also sheds light on how specific scenes were accomplished. The Behind The Scenes featurette gives the audience a very healthy amount of “fly on the wall” footage from pre-production through post. The featurette was shot entirely by the cast and crew and then edited together into a compelling, mostly linear story of the making of the film. It shows both the surprising scale one day and the shoestring budget the next!

RYAN: The featurette Wolf Hound: Creating the Visual Effects gives a detailed view at the process of bringing these scenes to life. With the help of Megan St. John at Hike Creative and Turncoat Pictures, some behind-the-scenes content was filmed during post, including an in-depth interview where I delve into the VFX efforts.

SCREEN: What’s next for you two?

MICHAEL: I would very much love to bring as much of the Wolf Hound team as possible to Movie #2 – a studio film, or another original which might be an ambitious action-packed Western, with trains, though a Wolf Hound sequel isn’t out of the question either… Whatever ends up being the best next movie will be made!

RYAN: Turncoat Pictures has some exciting things cooking. We are wrapping two upcoming films for Netflix and currently producing an ambitious short animation full of sci-fi and visual effects. As always, super proud of the team’s work!

Thank you to Michael and Ryan for stopping by! Wolf Hound is available now on all streaming services, particularly Amazon Prime Video and Apple TV, and on Blu-Ray and DVD at Amazon, Walmart, and Best Buy. Click here to enjoy Wolf Hound and the stunning work from Michael B. Chait, Ryan Urban, and this talented cast and crew.