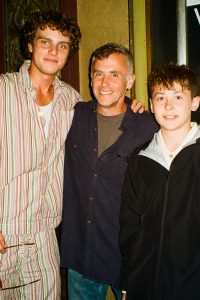 It’s been a thrilling month for the Chicago-made independent feature Relative as the film kicked off its theatrical run with a world theatrical premiere in Chicago. The film debuted at the Music Box Theatre on Wednesday June 8 then launched into a theatrical run throughout the various Chicagoland suburban communities throughout the rest of the month.

The greater Chicago film community has been extremely supportive of writer-director Michael Glover Smith’s feature to date, packing the Music Box and Siskel Film Center premieres. Some notable attendees have included Ozark and The Walking Dead star Cassady McClincy and Chicago Fire and Sex and the City fan favorite David Eigenberg, as you’ll see in the photo gallery below.

Here are some choice photos from the jubilant premiere at the Music Box, courtesy of photographer Emma Thatcher…

Relative continues its theatrical run this week at the Wilmette Theatre and will then embark on a cross country tour to theaters across the country. More on that as dates and destinations are announced.

Enjoy a few more fab photos from the packed premiere at the Music Box, courtesy of photographer Emma Thatcher…

“One of the first great films I’ve seen in 2022… Relative is an impeccably cast, superbly directed and utterly captivating ode to the spontaneity and resilience of human connection” — Matt Fagerholm, RogerEbert.com