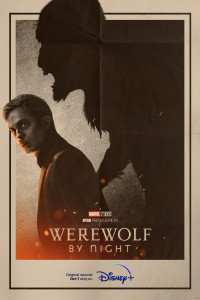 To the great honor of the creatives and producers from one-stop cross-media production company Sarofsky, the rising director chose their studio to create his momentous film’s opening and main-on-end title sequences.

Let’s take a look at the opening sequence…

“I absolutely loved working with Sarofsky on Werewolf by Night,” Giacchino began. “During production I prioritized practical effects as much as possible, and when we started in post, Sarofsky fully embraced that approach. The shots they created (many crafted physically and then photographed) are stunning, and they were fantastic collaborators.”

The director continued, “It’s fitting that Sarofsky is responsible for both the opening and ending sequences of Werewolf by Night – their work really ties our film together, and wholly embodies the aesthetic that I set out to create when we began.”

And here is the main-on-end title sequence…

Dedication to Classical Aesthetics and Techniques

“Our assignment began with a brilliant and thorough explanation of a distinct vision for the film and its titles by Michael himself,” Elvas explained, while also mentioning the extensive, hands-on involvement of post-production supervisor Tristan Mathews, film editor Jeffrey Ford, and co-executive producer Brian Gay. “Much more than a film about a werewolf, this is also the introduction of monsters to the Marvel Cinematic Universe.”

Enjoy this ghoulish feast of screen captures from the stunning collaboration…

Stylized to look and feel like a classic horror film from the 1930s or 1940s, all aspects of the “Werewolf by Night” production are designed to remain consistent with this visual language. Referencing Giacchino’s comments, for him, all solutions needed to be authentic to the time period, ruling out CG as a resource. To say the least, Sarofsky’s team accepted this challenge enthusiastically.

Specifically for the opening sequence, the goal was to establish the unique universe where the story is set – drawing the audience into the how and why behind the story’s starting point. For this animated sequence, Sarofsky created a series of illustrations to match the story being narrated. Longtime studio collaborator Tricia Kleinot nailed a style fit for a glass museum case: Her intricate sketches inspired by old etchings and scientific studies absolutely deliver the desired authenticity. Brought into After Effects, animated, and painstakingly timed out to a reference edit, the story leaps to life visually, then transitions back to live action, using the waxing gibbous moon as a connecting element.

Later, at the film’s conclusion, the main-on-end sequence afforded the filmmakers the opportunity to dramatically illuminate the unique MCU domain where monsters and their hunters collide. “Knowing this needed to be dark, mysterious, and somewhat sinister,” Elvas continued, “we set out to heighten the vintage look and embrace the imperfections of something made by hand. As if by fate, we reconnected with Javier Rodriguez Garcia (Lobulo), a specialist in the art of papercraft, just in time to invite him onboard for this project.”

This finished 106-second sequence is a magnificent visual feast of blood-red color over black, using iconic and novel horror glyphs in silhouette, highlighted by outlines of color that graduate into darkness. Titles appear in white with typography in the Priori typeface (inspired by old street signage and lettering from London neighborhoods), ultimately resolving into the Werewolf by Night logo designed by Andrei Popa.

The creation of those 20 featured glyphs is a deeply fascinating story in itself: Each took physical form as a “mini-set” shadowbox containing 20 or more individual layers of cut-out paper, which was intricately lit and filmed in Sarofsky’s studio, in partnership with director of photography Mike Bove.

Even the “prep” for filming these glyphs involved an intricate workflow, which ultimately informed key decisions and client discussions prior to undertaking the laborious process of cutting paper and building the mini-sets. To dial-in factors including ideal scale, lenses, and camera speed, the main-on-end sequence was previsualized using Maxon C4D. The illustrations were created in Adobe Illustrator so the layers could be imported into C4D, extruded and placed in 3D space. Once the look was just right, each scene was exported in wireframe mode and brought into Adobe Premiere, so Sarofsky Senior Editor Tom Pastorelle could edit it to the music track.

“In this phase, each scene was boarded out and then put into an edit where I would play with movement and timing,” Pastorelle confirmed. “That influenced the next stage where our design team started animating the boards. We met with Michael Giacchino and Jeffrey Ford. As a musician and also the film’s composer, naturally Michael was especially invested in how our sequence hit on certain beats.”

With approvals, as well as further experimentation and research by Bove, live-action production began with a Red Ranger Helium for principal photography, filming in 8K resolution and using a motorized slider for consistent speed. Also equipped with a variety of lenses for maximizing depth of field and parallax, Bove and Sarofsky’s creatives set out to experiment on set with light placement, movement and flickering, which reportedly made the shoot very exciting.

Here are some behind-the-scenes snapshots of the shoot, courtesy of photographer Daniel Geiszler…

Describing the project as “deceptively tricky,” Bove shared these details from behind-the-scenes. “We were shooting small objects very close with a repeatable camera move,” he said. “Achieving the depth of field needed at such close distances required a deep F-stop and we were mostly lighting through thick paper, so we tested out a bunch of different types of lighting fixtures before the actual shoot days.”

Bove continued, “In the end it came down to something pretty old school: Mole Richardson tungsten fresnels. We could get these fixtures close enough to the shadow box to achieve the levels we needed, and also the focusability and crispness of the light beam really helped bring out the texture of the paper when lit through the sides or the top. The boxes themselves were so beautiful – every time a new one came to set we had to stop everything to admire it. Javier did an outstanding job.”

Enjoy this final round of behind-the-scenes snapshots from the shoot, courtesy of photographer Daniel Geiszler…

From there, the studio’s finishing workflow involved minimal post, mostly consisting of minor clean-up and lighting tweaks, which allowed them to finish in Adobe After Effects. Since Sarofsky’s deliverables needed to conform with the Marvel VFX workflow, those very specific delivery specifications including naming conventions and color pipeline were adhered to strictly.

In the words of Erin Sarofsky, “This piece was a direct result of Duarte’s passion, vision and craftsmanship. He is an amazing creative with the ability to listen, lead and ultimately follow through. Watching him and Michael mind meld was one of the most rewarding parts of the process. I am so thrilled with the outcome!”

Speaking on behalf of Sarofsky, Elvas added, “When we pitch main title ideas, our main goal is to create something that feels appropriate for the film or show. I see this particular work as a testament to our adaptability to new and unique challenges. We are problem solvers who venture beyond the traditional motion graphics realm, and thrive when faced with projects that stimulate our imagination and creativity.”