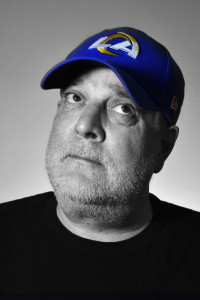 Award-winning editor Randy Palmer is one of the cornerstones of the superb squad at Optimus. He is also an avid Los Angeles Rams fans. And he also was kind enough to stop by SCREEN to share his highlights and lowlights of the Super Bowl commercial crop!

RANDY: For the 2nd straight year, Toyota had the best executed film with their Paralympic piece that opened the game. It was emotional, beautifully realized, and perfectly edited.

Was this the best ad? Probably not. That would be Rocket Mortgage’s Barbie spot. My guilty pleasure was the Larry David FTX spot, but no one will remember what that was for…

RANDY: The easy answer is Coinbase’s QR ad (yes, i took a picture and followed the web trail). Fucking lazy. Give me E-Trade’s monkey any day. Reddit had a much better version last year, and it was only :05.

But what I hated more was the Meta spot. Its takeaway was that they are buying up your memories and using them as false guideposts to a fake future. It made me cry, for reasons they didn’t intend.

RANDY: I applaud brands for pointing out the unspoken obvious. Like in the Google Pixel 6 spot. Also, please use more Yma Sumac, like Gillette did…

SCREEN: Any final comments as we wrap up?

Randy, Congratulations on your Rams bringing home the trophy, and thanks for stopping by to share your picks!