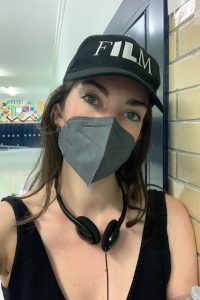 Clare Cooney couldn’t be happier. Her feature directorial debut, the horror-comedy Departing Seniors, has been filming throughout the month and is set to wrap this week. Clare has an all-star cast and production team alongside her. And she’s shooting back home in Chicago. SCREEN chatted with Cooney and has some exclusive behind-the-scenes photos for you.

“I couldn’t be more impressed with our cast and crew,” Clare shared with SCREEN. “I finish every day exhausted and elated — we’re pursuing a herculean task together. With such an ambitious, special script and a tight budget and schedule, I’m thankful to be working with such talented friends, old and new, in my artistic home of Chicago.”

And here are some exclusive behind-the-scenes photos from the set of Departing Seniors, courtesy of the production team:

The project is currently underway in her longtime artistic home of Chicago. The horror-comedy Departing Seniors stars Ignacio Diaz-Silverio, the lead in recently announced Amazon series Primo, alongside a superb supporting cast.

Cooney declares, “I couldn’t have asked for a more ambitious and exciting first feature. Jose’s sharp, funny, moving script is an ode to so many classic genre films, and yet uniquely its own. It has been exhilarating to dive into collaborating on this project with a team as diverse as the characters on the page. I look forward to heading back to my artistic home of Chicago to bring this suspenseful, whip-smart, thrilling script to life.”

Written by Jose Nateras, the film follows witty high school senior Javier (played by Diaz-Silverio), who after witnessing an act of bullying, begins having psychic visions that reveal the horrifying truth behind a rash of supposed suicides at his school. It’s up to him and his sarcastic best friend to unmask the truth behind the grisly occurrences.

Clare Cooney has earned much acclaim from film festivals and critics alike, and these accolades have led the filmmaker to this feature film directorial debut.

Clare burst onto the film festival scene with the powerful short form drama, Runner, which played at 15 film festivals, winning a whopping six awards and garnering Cooney a “Filmmaker to Watch” nomination from the Academy-Qualifying Atlanta Film Festival. Click here to watch Runner.

Cooney’s follow-up to Runner, the poignant romantic drama Pick Up, has attracted more than 500,000 views on the prestigious indie platform Omeleto. Here is SCREEN’s writeup on the film, and here is your chance to view the full movie…

U.S. and U.K. Collaboration in Chicago

Departing Seniors is being produced by Dashawna Wright’s Choppe Productions along with the aforementioned director Clare Cooney and screenwriter Jose Nateras. Kelly Parker is also producing, with support from Chicago’s Divisionist Films. Greg Newman and Queensbury Pictures are executive-producing.

U.S. and UK genre firm Queensbury Pictures was most recently in the Chicago and Illinois region to produce Girl On The Third Floor starring Chicago actor Sarah Brooks and CM Punk, which made its world premiere at SXSW in 2019.

Check back here at SCREEN for updates about Clare Cooney and the latest in independent film news in Chicago and the Midwest. And you can also click right here to subscribe to our weekly email newsletter.