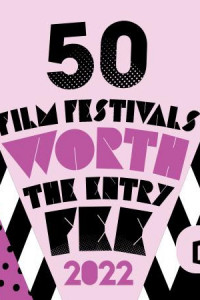 Did your favorite film festival crack the Top 50? Moviemaker Magazine has released its annual list of ’50 Film Festivals Worth the Entry Fee,’ and there are quite a few festivals in the Midwest and between the coasts that made the grade. Here are a few that might be worth a roadtrip this year, including one happening right now…

Moviemaker spends months researching the best places to get your film seen, celebrated and sold. As Moviemaker puts it, “Some of these festivals happen to be in the most beautiful places on earth… because after two years of waiting, you deserve an incredible trip.”

This festival is happening right now through Sunday! Moviemaker writes, “One of the only festivals that will be entirely in-person this year, Julien Dubuque is known for hospitality. It’s quite generous with travel, transportation and accommodations, which include its HomeStay Program, in which locals warmly welcome visiting filmmakers into their homes. All meals are free for the duration of the festival. “I believe that filmmakers and films that screen at JDIFF, no matter how large or small in budget, are important and deserve to be treated the same. From the minute our filmmakers arrive, they are treated as VIPs,” says executive director Susan Gorrell. If it sounds like the ultimate festival for Main Street, U.S.A, we can’t argue: Almost the entire festival takes place on Dubuque’s charming Main Street. But the festival has even more going for it than its considerable homespun charm: It draws top distributors, good media attention, and notable films like the acclaimed documentary The Cave. It offers more than $40,000 in prizes and hosts helpful panels, coffee talks, one-on-one conversations, and workshops on writing, directing, costumes and more.”

According to Moviemaker, “Executive director Melanie Addington takes care to make “everyone feel like a VIP” at this Midwestern treasure. Awards and prizes include the Stubbornly Independent Award, which includes $5,000 and a one-of-a-kind Tallgrass tap handle — you’ll have to decide which is more valuable. There’s also a $5,000 award for Female Filmmaker Spotlight, and the Gordon Parks Award for Black Excellence in Filmmaking includes not only $5,000 but a $15,000-value Panavision camera rental. Tallgrass holds panels and workshops galore, as well as a bus tour of Wichita for filmmaker guests. Tallgrass is very generous with airfare and lodging — among other perks. ”They take great care of you,” says One Pint at a Time filmmaker Aaron Hose. “From travel to accommodations, local transportation, parties, private bus tours, free professional headshots, killer swag bags, and all-day VIP and hospitality rooms jam-packed with endless food and beverage… They make it easy for you to mingle and meet new people. Tallgrass is truly one of the best events on the circuit!” This year’s festival is scheduled to be both in-person and online, via Eventive.”

According to Moviemaker, “Heartland just celebrated its 30th year with a festival that proudly displayed its many attractions, including generous cash prizes totalling more than $60,000, and early screenings of such acclaimed films as Spencer, King Richard, Belfast and The French Dispatch. It’s a magnificent festival for networking and meeting distributors, as Krimes director Alysa Nahmias can attest — Sheila Nevins and her team at MTV Documentary Films acquired the documentary out of Heartland.

Nahmias says her success is “evidence that regional film festival premieres are a viable strategy for filmmakers. The more creative buyers in the film industry are searching off the beaten path, particularly as festivals have gone hybrid with in-person screenings and online access.”

Moviemaker writes, “Since the pandemic prevented in-person editions in 2020 and 2021, CIFF held its latest edition in its new home, the gorgeous not-for-profit downtown arts center Playhouse Square. You can watch highlights from the festival here. Cleveland is a pretty selective festival, but the top-notch filmmakers who get in can earn substantial recognition and rewards. It offers a very impressive $115,000 in prizes, as well as very receptive audiences and strong exposure. The festival is also quite generous in providing flights, accommodations, transportation and even a per diem to accepted filmmakers. But its best attribute may be its work with local nonprofit groups. More than 150 hold Q&As and special events with filmmakers to amplify the messages of the films and the missions of the nonprofits, and to give audiences constructive ways to get involved and make a difference, so they can be not just passive audience members but engaged citizens. Since this year’s festival just concluded, you have plenty of time to plan now for 2023.”

According to Moviemaker, “Celebrating its 25th edition, Indie Memphis turns up on this list year after year in part because it represents a perfect mix of location and festival. With its blend of style, swagger, grit and sheer character, Memphis is one of the most enthralling cities in the world — and Indie Memphis captures, harnesses, and adds to its glory. What it does best, says artistic director Miriam Bale, is “celebrate brilliant films that fall through the cracks of the other festivals and in the film industry.” She adds that it “values diversity and artistry equally, as inextricable elements.” The festival is generous with travel, accommodations and transportation, and draws so much industry notice that distributors have been known to pick up films from Indie Memphis even without attending the festival. Its 20 awards include the Soul of Southern Film Award for the best Southern film, one for scriptwriting, another for best poster design, and several awards for Hometowners, including the Best Hometowner Music Video, because no one does music like Memphis.”

“It’s a film festival curated and run by hardcore film fans who love the craft and deeply respect writers,” says Dan Abramovici, director of Play it Again. “It’s like you’re at a music festival, but instead of being surrounded by hipsters you’re surrounded by deeply neurotic writer nerds like yourself. And instead of seeing Jay-Z onstage you’re watching Michael Schur talk about a writer’s room.” Great press and industry exposure are among the biggest draws to this festival that also nails the art of networking. The festival stocks its juries with panelists who also become champions for the films and talents they discover — past jurors have included Tom Skerritt, America Ferrera, Ashley Miller, and Leigh Whannell, as well as representatives from heavy-hitters like CBS Films, Gravitas Ventures, Dreamworks Animation, Showtime, CNN Films and the Sundance Institute. The festival works hard to foster meaningful conversations, and the top-notch parties invite filmmakers to mix it up with agents, managers, reps, distributors, producers and execs. The Writers Conference is second-to-none and emphasizes year-round teaching and harnessing of your skills, while also opening doors. The festival is still determining its blend of in-person and online events for this year.

Here’s an excerpt from Moviemaker: “Film is thriving in Music City!” says program director Lauren Ponto, and she speaks the truth. Nashville fares very well in our rankings thanks to the many opportunities for press, access to distributors A24, Neon, and Kino Lorber, and the many networking opportunities in one of the best places on earth for a fun night out. The festival hands out 26 awards that include cash prizes ranging from $500 to $2,000 — 18 awards in its film competition, and eight in its screenwriting competition. Nashville is also generous in providing airfare, lodging and travel to guests when possible, and hosts events all over town, including at famed locales like The Bluebird Café and Third Man Records. Other highlights include the Creators Conference, in which filmmakers, executives and attendees discuss industry trends and resonant cultural issues. And there’s a top-notch program from music supervisors, because of course there is.

“Big Sky is an unpretentious, yet carefully curated event led by cineastes deeply engaged in the nonfiction form,” says A Reckoning in Boston filmmaker James Rutenbeck. The only drawback of staring at screens in Missoula is how much gorgeous scenery you’re missing. The location — and the festival’s stellar reputation for serious documentaries — are among the biggest draws for filmmakers, and Big Sky is democratic in its selections: Programmers choose over 90% of them from submissions. The festival offers panels, workshops, master classes and pitching, as well as night and brunch parties. The 4th World Media Lab supports six Indigenous filmmaker fellows as official festival delegates, and the Filmmakers in the Schools program sends filmmakers to local schools to meet with tomorrow’s moviemakers. The 10-day running time of the festival enables attendees to choose at their leisure from more than 150 films each year, and perhaps hit the trails, too. The festival offers a “recreation concierge” who makes sure guests get out and explore wintry Montana.

Moviemaker writes, “This kinetic festival aims for “an atmosphere where audience, industry, and filmmakers are constantly interacting in a fun, organic way,” says programmer Lisa Dreyer. “Our festival is full of boundary-pushing films you won’t see anywhere else, epic experiences, and tons of surprises.” Its recent U.S. premieres included the daring Titane and Lamb, and it hosted the world premiere of V/H/S/94. Fantastic is quite difficult to get into, but if you do earn a spot, you’ll have great access to press and distributors: Neon, A24, IFC, Utopia and Magnolia have all been known to attend. Prize packages vary from year to year, and the good times include parties aplenty as well as podcast recordings, interactive contests, live music, and VHS swaps. Toby Poser, director of the very buzzy 2021 horror film Hellbender, writes that Fantastic Fest “BLEW ME AWAY,” praising a “non-stop, no B.S., no-attitude FUN and inspiring festival experience. This fest is a well-oiled machine that still makes me smile thinking of it.”