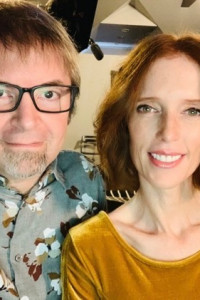 Oak Park residents Adria Dawn and David Tarleton, of Tarleton/Dawn Productions, are making their mark through their films for social change.

On May 24th, Dawn’s birthday, the filmmaking partnership and married couple won two Telly Awards. The Telly Awards, the worlds largest honor for video and television content across all screens, is an elite filmmaking distinction. With over 11,000 entries this year, Dawn and Tarleton were elated to win not one, but two Telly awards. Their alcohol use disorder film “Gray Area” based on Oak Park resident and mental health expert Kelley Kitley, won the bronze Telly award for “Social Issues.” Dawn and Tarleton were also thrilled to find out that their Black Lives Matter film, “Karen” won the silver Telly award for “Social Impact.”

Here is an excerpt from the short film “Karen”…

“Winning both of these awards has been thrilling for us,” Dawn says, “every time we make a film for social change our hope is that others benefit from it; and that they are healing, educational or revealing in some way to the viewer.”

Tarleton/Dawn Productions has been receiving awards for these two films throughout the year on a global level. During just the past twelve months, the films have won:

“We share these awards with our casts and crews who helped make these films possible,” Tarleton says, “for ‘Gray Area,’ Kelley Kitley oversaw the financing for the film on her own and without her bravery to tell her story, ‘Gray Area’ could not have been made.”

Tarleton/Dawn Productions also makes a kids’ series for social change called “Kids Matter.” The couple just finished making the eighth episode on the series called “Identity.” “All of the films in this series deal with current social issues kids face today,” Tarleton said. “Our latest one is on gender and labeling,” Dawn says, “these films are educationally distributed and we hope that schools continue to use our content to foster hard but important conversations in the classroom.”