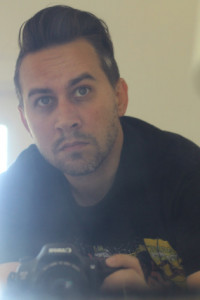 B-Reel has signed Daniel Brown to their directorial roster. Having received much acclaim for his art film Color TV, No Vacancy, Seattle-based Daniel Brown is an artist whose exceptional proficiency and versatility allows him to move seamlessly from one field of storytelling to another.

In Brown’s productions, each and every shot is made for impact — his commercial work has a snappy and clear narrative rhythm, and his strong grasp on animation and creative direction open up innovative storytelling possibilities.

Click here to take a look at Daniel’s reel.

“I first learned of Daniel through his No Vacancy work — it’s stunning and powerful,” recalls Managing Director and Executive Producer Michael McQuhae. “It’s clear Daniel’s experience as a Creative Director really informs knowing what is possible when it comes to making a commercial.” And it is this eclectic union of rich production design, captivating VFX and concise storytelling that rules Brown’s one-of-a-kind works each time.

A maker with a unique sense of artistry, Brown breathes an aura of magical realism into his motion work through his natural sense for animation and creative direction. Brown has produced ethereal and atmospheric music video work for prominent artists such as ODESZA, Jon Bellion and Merk & Kremont. Commercially, he has directed ads for Nike, HTC, Beats by Dre, Amazon, T-Mobile, Sundance Film Festival, Burger King, Fox Television, Microsoft and more — including Wendy’s first-ever Super Bowl Commercial.

Here is a look at Daniel’s work for ODESZA…

Brown initially debuted in the industry as an animator at the Emmy-winning company Digital Kitchen before taking on writing and creative direction. He currently serves as the Executive Creative Director at World Famous and has a close working relationship with the Amazon creative team. Previously, Brown was represented by UNHEARD/OF and Society as a director and as Creative Director of Oh, Hello.

Regarding the signing with BR•F, Brown commented that he immediately felt right at home with the company’s multifaceted nature: “They understand where I want to go and where I see my value.” He mentions how BR•F is a great fit for Brown’s repertoire of production skills, as well as an opportunity for him to dive back into narrative work.

Most recently Brown wrapped campaigns with Amazon Web Services titled “Your Age” and “Curiosity Kid.” He is now working with Spider-Man and Moon Knight illustrator Ron Ackins on publishing a self-produced graphic novel, as well as developing a couple of feature-length projects.