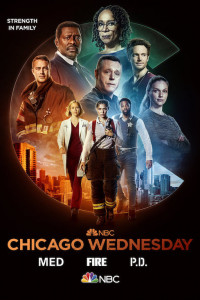 “Yep, This Is The World We Live In” is the title of the new episode of Chicago Med, set to debut Wednesday at 7 p.m. Central, to kick off the highly popular #OneChicago lineup. Here’s the official synopsis: The effects of the supply chain shortages continue to impact the E.D. when Vanessa’s drug dealer reappears. One of the victims of the recent train crash needs a transplant, forcing Crockett to improvise. Charles and Nellie help a patient with amnesia.

Here’s the official synopsis for Wednesday night’s new episode of Chicago Fire at 8 p.m. Central, entitled “Haunted House”… Firehouse 51 hosts a Halloween open house. Kidd and Severide help a young girl after she gets kicked out of her home.

OneChicago Wednesday wraps up with the 9 p.m. Central brand new episode of Chicago P.D. Here’s the official synopsis for “Pink Cloud”: Upton’s dogged pursuit of a missing teenage girl leads the team into a dark web of human trafficking. Chief O’Neal becomes involved with the unit’s investigation when it becomes evident his son, Sean, has a connection to the missing girl.