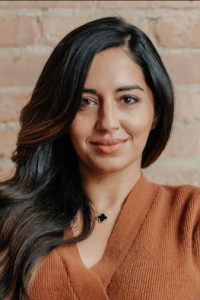 What do Captain America, Foo Fighters, and the best sushi ever have in common? They’re all here as Picture North Executive Producer and Head of Development Neha Datt Schultz answers Five Questions with SCREEN. Let’s get to it!

If you could be a part of any band or musical group in history, what would it be? Why?

NEHA: Tough question. So many answers. Playing drums alongside Dave Grohl and the Foo Fighters. Jamming in the brass section of Earth Wind and Fire. Rollin’ on the River with Tina Turner and the Ikettes. Playing guitar on stage at Woodstock with Jimi Hendrix.

What are you looking forward to in 2022?

NEHA: Spending time with my new baby! I just had my third boy. I’ve accepted that my house is officially a boys club now. We call it Camp Schultz. I am sorely outnumbered and should probably get a girl dog or something.

What’s that TV show you’re a little embarrassed to admit you love to watch?

NEHA: I am a huge comic book and Marvel fan, so I’ve been binging all of the Marvel series on Disney+ including Falcon & Winter Soldier, Hawkeye and Loki.

Your favorite restaurant on the planet? What do you order when you go?

Hiro Sushi in Toronto. It’s unfortunately closed now as chef Hiro (who trained under the famous Jiro) retired in 2019. The Omakase was an out of body experience. I’ve had some other pretty memorable Omakase experiences at Uchi (Dallas/Austin) and Sushi Suite 202 (Chicago/NY/Miami).

NEHA: Biographies and stories about women in history and contemplating how the story might have been told from their perspective.

NEHA: My twin boys were born 11 days before Christmas, on the same day as my wedding anniversary, so my beautiful wedding in Costa Rica and the arrival of my twin boys three years later were two pretty epic gifts from the universe. Now December is a month of holidays and celebrations.

For more from Neha and her team at Picture North, click right here.