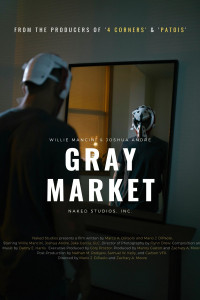 For years Naked Studios, Inc. has been teaming up with Chicago creatives to deliver captivating visuals, but their most  recent unveiling of ‘Gray Market’ not only highlights the company’s exceptional originality, but their superior  cinematic vision as well.

Gray Market, directed by Mario DiPaolo & Zachary Moore and executive produced by Cory Proctor, is a 30-minute crime drama series set in Chicago’s Little Italy neighborhood that follows a charming sociopath who oversees a crew of people operating in the gray areas of society. Infamous Chicago mobster Jerry Scalise served as the technical advisor and will contribute story elements that drive Gray Market, giving the project a unique inside connection into the organized crime world of Chicago. View the newly released teaser trailer for Gray Market here, and follow Naked Studios on Instagram @naked.studios for updates as it makes its way across the festival circuit, film and buyers markets.

Here is your first look at Gray Market:

Naked Studios (parent company of Naked Gallery, Inc.) is the company behind award winning short films ‘4 Corners’ (2018) and ‘Patois’ (2020) and has been adding a wide array of projects to their slate. With several more developments in the  pipeline, including two scripted series and two reality series seeking sales and distribution, it wouldn’t be a stretch to say  that there’s a pilot order right around the corner for Naked Studios.

Color producer Dan J. Butler, has been partnering with the Naked team since the beginning. “Dan has provided resources  and creative support at every turn. Now that he’s moved to Carbon, we’re excited to continue the partnership across our  VFX and color grading. ” says Moore.

Adding to the excitement, both Gray Market and Patois will be competing side-by-side at the famed Cannes Indie Shorts Awards this October, it’s safe to say executive producers Cory Proctor and Zachary Moore are determined to establish a  lasting foothold in the entertainment industry and we’re all excited to see what the future holds for this production company.