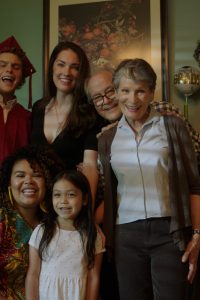 The Midwest Film Festival (MFF) presents its second entry of their 2022 season. On Tuesday, April 5, at 7 pm, MFF will host an hour-long networking soiree before featuring the Midwest premiere of Michael Glover Smith’s feature-length film: RELATIVE at 8 pm at the Gene Siskel Film Center. This screening will be followed by a Q&A featuring members of the cast and crew.

“One of the first great films I’ve seen in 2022…RELATIVE is an impeccably cast, superbly directed and utterly captivating ode to the spontaneity and resilience of human connection” — Matt Fagerholm, RogerEbert.com

This is Michael Glover Smith’s fourth film, having previously written and directed the independent feature films COOL APOCALYPSE (2015), MERCURY IN RETROGRADE (2017), and RENDEZVOUS IN CHICAGO (2018), all of which won awards at festivals across the U.S. and were the subject of rave reviews.

A Chicago Film Through and Through

The Timeline for Tuesday

All activities will convene on Tuesday, April 5 at the Gene Siskel Film Center, 164 S. State Street, in Chicago.

Attendees are invited to network with their fellow filmmakers and peers during the first hour of this event. Vendor/sponsor tables with merchandise from the Midwest Film Festival will be present and available to all guests.

The doors to the theater will open at 7:30 pm, with the screening starting at 8:00 pm. After the screening, guests will be able to enjoy an interactive filmmaker Q&A, moderated by an MFF host. Attendees will have the chance to hear from and speak to the film’s cast and crew present at the event, including: director Michael Smith, actors Wendy Robie (TWIN PEAKS), Francis Guinan (Steppenwolf Ensemble member), Emily Lape, Keith D. Gallagher, Elizabeth Stam, Melissa DuPrey (GREY’S ANATOMY), Heather Chrisler, H.B. Ward, and Cheryl Hamada.

Midwest Film Festival Executive Director Erica Duffy states, “We’re so excited and honored to have such a strong, Chicago-based production at MFF for its Midwest premiere. It’s testament to the vibrancy of the Midwest film industry.”

“The Gene Siskel Film Center is proud to be the home of Midwest Film Festival First Tuesdays. The monthly event infuses the Film Center with such a positive, locally-focused energy, and provides us the opportunity to connect with alumni of our screens, as well as emerging Midwest voices. We’re thrilled to be the home of the Chicago premiere of RELATIVE, welcoming Michael Glover Smith back to the Film Center for what promises to be a great night.” said Rebecca Fons, Director of Programming at the Gene Siskel Film Center.