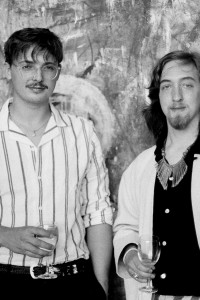 A group of young Chicagoans scored a win for the creative community by hosting a gallery premiere and artists’ exhibition called Meaning and a Lack Thereof earlier this month in Logan Square.

Running until August 15, Meaning showcases the work of Lucca Colombelli and Cormac Steinbock (pictured here, left to right), who met about three years ago while studying at the Art Institute of Chicago. It is the first event to be held in the 2000 N. Milwaukee Ave. location that the artists leased in November last year.

Lucca is a nouveau impressionist who combines master brushwork with autumnal shades of brown and gray. “I do realism from a very abstract point of view,” he says. “It helps to make my work feel more surreal than just a painting of a swamp or whatever.”

Cormac is an abstractionist who helps viewers lose themselves in mesmerizingly bright patterns. “I’m very interested in exploring the emotive connotations of color and the mental landscapes they put us in,” he says. “A lot of work explores the intersection of structure versus the organic, industry versus nature, the push and pull of being whimsical, organized beings in a rigid or structured society.”

Here is a sampling of what you will experience at this artists’ exhibition:

Besides showing dozens of their own pieces, the artists are offering a glimpse of their collaborations at the show. They completed these works by alternately painting layers on the same canvas in near silence.

“It’s an unspoken negotiation and compromise, and you have to assess the work as you go,” explains Lucca. “There’s sometimes a ‘stop’ or ‘hold on,’ but more often than not it was super spontaneous.”

The guests who attended Meaning and a Lack Thereof ranged from Millennials to Baby Boomers. Fueled by live music and complimentary wine, they turned the event into a triumph over the pandemic. Here are some exclusive photos from the opening:

The “soft opening” on July 1 was followed by an official opening the on next day. “We couldn’t have asked for a nicer group of people,” says Gallery Director Chloe Harrington. “I found out later that there was a line around the corner to get in,” adds Cormac.

The show — as well as the gallery itself — evolved from an inspiration shared by Lucca, Chloe, and a handful of friends sharing a two-bedroom West Side apartment during the quarantine. In a certain way, it guided them through pandemic-induced spiritual bewilderment, career disruption and, in one case, parental bankruptcy.

“We were living in this rundown shack near Rockwell and Cortland,” Chloe recalls. “People took a step back and took control of what they wanted to do with themselves.” Enjoy more exclusive photos from the opening:

The roommates included photographer Bennett Fuhrman, who had partitioned a section of the apartment’s living room to create his sleeping quarters and, eventually, documented all of the art featured in Meaning and a Lack Thereof.

Other collaborators included graphic designer Aida Rasmussen, who worked overtime to create all of the show’s communication pieces. Kevin Kenny and Michelle Fitzpatrick, who supplied the evening’s refreshments through their new wine shop, Door 24. And Mickey Wozniak, who managed the event’s publicity, secured its valet parking and took care of enough details to live up to the unofficial title that Lucca and Chloe have bestowed upon him: “The Peoples’ Mayor of Chicago.”

In a post describing the inaugural exhibition, The Visualist reported that Meaning and a Lack Thereof  “reimagines and reclaims the white wall as a space for community and opportunity.” Lucca, Chloe and Cormac intend to bring that spirit to life “every month or so” with shows featuring graphic design, film, photography, and “a whole bunch of stuff,” according to Lucca.

They are also hoping to collaborate with advocacy organizations like Todd Belcore’s Social Change and Vic Mensa’s Save Money Save Life. Here is more about Mensa’s organization…

“We’re doing it in a way that’s inline with what we’d like to see, as opposed to what we’ve watched happen in the past,” says Chloe.

The artists’ exhibition Meaning and a Lack Thereof, showcasing the work of Lucca Colombelli and Cormac Steinbock, runs through August 15th in Logan Square.