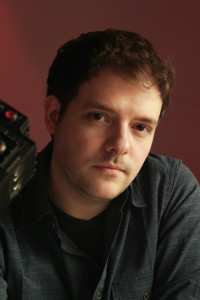 Director Curtis Matzke’s five-minute short, The Orchestra, premiered this month at filmshortage.com. A one-act thriller with virtually no dialogue, the film transforms a student music rehearsal into a crescendo of terror that builds throughout the story.

Nimble direction — along with composer Tony Scott-Green’s mysterious score and actor Gillian Butcher’s intimate performance — have helped The Orchestra win numerous awards since its theatrical premiere at Cinepocalypse in 2019. The film has also screened at the likes of Elevated Films and the Midwest Film Festival.

Matzke wrote the script in 2019 after he happened to see “a girl who was dressed kind of unusually, carrying an instrument case across the street” at the University of Michigan.

“She looked like she was in a horror movie,” he recalls. “Once I had the idea, wrote it out very quickly.”

Next Up: The Orchestra Feature Film

Notable, indeed, but the six-minute version is something of a halfway point on his plan to shoot a full-length “coming-of-age story” about a “quiet and reserved” female student. The feature script has some momentum, having won Best Screenplay at the Anchorage International Film Festival and at the Woods Hole Film Festival.

“It’s about the main character finding her voice and speaking up for herself,” he explains. “It starts at the beginning of a semester where she’s going to a music conservatory and follows her as she learns how to deal with this new environment, which I think is relatable to anyone who has gone to school.”

Mysterious sounds haunt the lead character, who cannot identify their source or even convince people that they are real.

“You’re sympathizing with everything she’s dealing with even though there’s no evidence that it exists,” says Matzke. “These sounds are following her, and the musical aspect is part of the horror.”

Unseen forces that scare characters in the likes of The Babadook and The Grudge shape Matzke’s inspiration for the feature length script, which he completed before writing the short.

“They are good examples of the monster being an actual representation of trauma,” he says. “Thinking about how institutions can take advantage of female students in weird, creepy ways in the name of tradition is part of the challenge that the lead character faces in the full-length version of The Orchestra.”

Matzke seems fairly confident about the future of the feature, but is not mentioning any specifics just yet. His other recent projects include a script for the sci-fi drama Tin Can, which has been named a finalist at the GenreBlast Film Festival, and Sink, a horror short currently in post production.