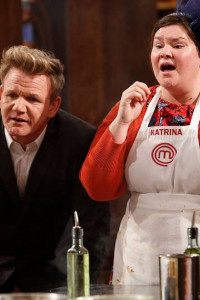 This fall in Milwaukee, Chicago-based travel app and linear channel, GoTraveler, is filming their first original series pilot. The new series CURBSIDE EATS is centered around good food, good drinks, and great conversation through the lens of females, to ignite friendship and solo travel.

75 percent of travelers who take adventure, cultural or nature trips are women. Both produced by and starring females, the travel and food docu-series CURBSIDE EATS is changing the typical travel show narrative. Co-hosted and produced by quirky traveler Maya Norman and chef Katrina Kozar (pictured left), the show follows along as the two travel by RV exploring communities and interviewing local chefs and experts that sell curbside and carry-out meals during the time of Covid-19.

You may recognize Chef Katrina from MASTERCHEF Season Six with Gordon Ramsay, when she cooked her way into the top five. Here is a quick clip from her successful stint on the wildly popular culinary competition:

More from the Hosts of CURBSIDE EATS

A home cook from Milwaukee, Wisconsin, Katrina Kozar has a passion for food and culture. Katrina teaches cooking through her business, Katrina’s Kitchen, and mustard-making with Mustard Queens. Beyond her successful run on MASTERCHEF, Katrina has also jumped to the other side of the table, judging MASTERCHEF: SLOVENIA, and the 2019 International Dessert Competition. An avid traveler and seeker of farm to table food, Katrina enjoys road trips, gardening, playing disc golf, doing handstands and hula-hooping.

The Business of CURBSIDE EATS

Independent restaurants are small businesses that play a key role in the restaurant industry, which totals $760 billion in sales annually; about 3.5 percent of the U.S. GDP. During this series, CURBSIDE EATS will focus on the message that we can’t change the situation, but we can change how we react.

A unique way that GoTraveler is approaching funding is by utilizing the OTT landscape and working with sponsors rather than relying solely on advertising. In February 2020, the Streaming Video Alliance stated over 80% of consumers are streaming more video than they did three years ago.

GoTraveler, a division of Questar Entertainment, is the world’s largest travel channel with a line-up of travel shows from top travel experts including Anthony Bourdain, Rudy Maxa, Laura McKenzie, and Shari Belafonte. The new GoTraveler app launched in 2020 and is free and available on Roku, Apple TV, iPhone, Android and Fire worldwide.

Final Facts on the Pilot

Filming for the pilot is set to begin next month. During the inaugural episode, CURBSIDE EATS will visit local Milwaukee favorites like Lakefront Brewery as well as Tandem with Chef Caitlin, People Power Produce, and more.

As Katrina and Maya make their way through Milwaukee, check back here at Screen Magazine for updates on CURBSIDE EATS.