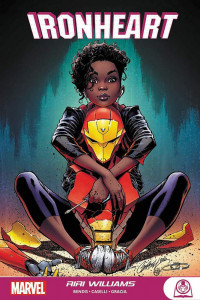 SCREEN broke the news last fall that the Marvel Studios series Ironheart was likely to film in Chicago in 2022, and it appears that time may be approaching. Sources tell SCREEN the Marvel series is expected to begin filming this June in Atlanta and Chicago. Meanwhile, Black Panther director Ryan Coogler has joined the project as Executive Producer. And in even bigger news for Windy City fans, Chicago native Samantha (Sam) Bailey will be directing multiple episodes of the series.

In terms of production dates and locations, there are more details to come over the new few weeks, but sources tell SCREEN the series could begin filming as early as June 20th. As for how much of Ironheart will be filming in Chicago compared to Atlanta, here are the factors at hand. Marvel Studios has a hub in Atlanta, and produces much of its content there, so we should assume quite a bit of filming will take place in Georgia. That being said, the lead character of Ironheart, “Riri Williams,” resides in Chicago, so expect a significant amount of filming in the Chicagoland area. As for how much in each city… those specifics will come to light soon.

One fact that is certain is Chicago native Sam Bailey will be directing multiple episodes of this latest foray into the Marvel Cinematic Universe (MCU).

What We Know About Ironheart So Far

Ironheart will star Dominique Thorne as Riri Williams, a genius inventor and creator of the most advanced suit of armor since Iron Man. Thorne’s recent credits include the Oscar nominated drama Judas and the Black Messiah. Deadline recently reported that Anthony Ramos also is joining the cast. Anthony Ramos is best known for his work in the smash hit musical Hamilton and the studio movie In the Heights.

So Who Is Ironheart?

There is another notable Chicago connection with the Ironheart franchise. One of the writers on the comic book series back in 2018 was Chicagoan Eve Ewing. Click here to enjoy her interview with marvel.com. As to Ewing’s involvement with the television series, SCREEN will have updates as they become available.

Marvel Studios President Kevin Feige’s Ironheart team will be led by head writer Chinaka Hodge. Hodge is a screenwriter, poet, playwright, and educator. Her past television writing credits include the Apple reboot of Amazing Stories, as well as the TNT series adaptation of Snowpiercer, starring Daveed Diggs. She has published two books of poetry to date, For Girls with Hips: Collected Poems and Writings and Dated Emcees. Her plays include Chasing Mehserle and Mirrors in Every Corner. She is also a founding member of the hip hop collective “The Getback” along with Diggs and others.

Will Robert Downey Jr. and Gwyneth Paltrow Appear in Ironheart?

Marvel Cinematic Universe diehards continue to speculate as to which famed heroes and heroines may soar into the Ironheart series. According to ScreenRant, “There is a strong chance that MCU veterans like War Machine (Don Cheadle), Pepper Potts (Gwyneth Paltrow), and Happy Hogan (Jon Favreau) could appear. Many are also hopeful that Robert Downey Jr. will return as an AI version of Tony Stark. Meanwhile, Riri’s Black Panther: Wakanda Forever role could mean Shuri (Letitia Wright) and other characters from the sequel could pop up too.”

So far, there have been no official reports that Downey Jr., Cheadle, or Paltrow will be appearing in Ironheart. That being said, there is much more information to come on this highly anticipated series, so until there is confirmation either way, the MCU diehards will continue to buzz.

Check back here at SCREEN for updates as Ironheart forges ahead into production. You can also click right here to subscribe to our weekly email newsletter.