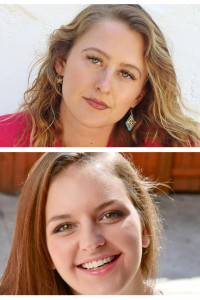 As Halloween thrills trail into November and those Fall chills begin to set in, a haunting tale is beginning to take shape for the year ahead. Chicago/LA filmmaker Layne Marie Williams is collaborating with actor-writer Campbell O’Hare for The Hallows, and the duo seeks to challenge the traditional constructs of the horror genre. Williams stopped by SCREEN to bring us – and you – an exclusive look at their feature film in development…

SCREEN: Thanks for stopping by, Layne Marie! Let’s get right to it. Can you take us on a deep dive into the heart of The Hallows?

LAYNE MARIE: The Hallows is this unexpected witch’s brew of Halloween nostalgia, dark Irish folklore, coming-of-age story, and our lived experiences of the loss of a parent. We’re inviting our audiences in with the warmth of that autumnal nostalgia that makes a good Halloween movie rewatchable year after year, while exploring grief within a family in a way that doesn’t shy away from the deep, dreadful, sometimes hopeful messiness of it. The film expands into fantasy and folklore in a way that stretches the bounds of the horror genre through the lens of our protagonist’s youthful passion and imagination, while still taking her seriously as an emotional, intelligent, formidable young woman.

SCREEN: And that young woman is…?

LAYNE MARIE: Cloudine is that formidable young woman! She’s newly 12 with a strong sense of justice and an unwillingness to give up. Her mother mysteriously disappeared and when her father suggests that it’s time to give up the ghost, it reignites her passion to solve the mystery and bring her mother home. They say that young people are more sensitive to the spirit world because the veil is thinner for them, and that it’s especially thin on Halloween. It might just turn out that for those reasons, Cloudine is the only one who can solve the mystery.

SCREEN: You have a new collaborator for this project, Campbell O’Hare. How did the partnership between you and Campbell come together?

LAYNE MARIE: We built our friendship on late nights and early mornings in college in Philadelphia with a Canon Powershot and a prayer, making scary movies to help us process our big feelings. She’s an actor with the Wilma Hothouse Acting Company in Philadelphia and brings a dynamic heart for character and ear for dialogue to the project. Now, we find ourselves in our thirties on opposite sides of the country, still chasing that magic we used to make together and finding it thrilling all over again. Recently, we’ve been joined by producer Julius Pryor of Pryor Hill Productions, and his passion for empowerment, authenticity and excellence has been such a welcome fan to the flames of our work.

SCREEN: So as of today, where does The Hallows stand, and what are the key steps ahead?

LAYNE MARIE: We’re a fair few drafts in and starting to buckle down, finalize the piece, and take steps toward pitching it! We’ve been wrestling in semi-secret with it for three years now and are looking forward to being reignited by feedback. This includes applying to the Sundance Institute Horror Fellowship, where we hope to take the story from its swamps to its full magic and ultimate catharsis. We have a strong sense of character, an abundance of ideas, and a bold thrust of story, and now it’s time to clarify, simplify, and reinvest in the essential elements of our story.

SCREEN: You are targeting late 2023 or early 2024 for production. Where will you, Campbell, and your team be filming this feature?

We’d love to take this film to the South where its roots reside. I grew up in Montgomery, Alabama and my creative partner Campbell comes from Prince George County in Southern Virginia. If you come from the South, there’s this sense of horror that comes from the history of the land, the spirituality of the people, the lush greens of the woods and swamps and the true darkness you can only get when you’re far from the city. There’s this experience you have as a Southern person where every conversation with an old friend is also a sort of ghost story. The film is chasing our protagonist Cloudine from childhood to adulthood, and it would be a super rich creative experience for us filmmakers to also find ourselves back in a place that reminds us of childhood.

SCREEN will keep you posted as this promising horror thriller forges ahead into production in late 2023 or early 2024.

In the meantime, if you would like to get involved in The Hallows, email legacymariepictures@gmail.com as Layne Marie and Campbell are looking for executive producers and collaborators that are looking to innovate in the horror and magical realism space.

Be sure to check back here at SCREEN Magazine for the latest in independent film production. You can also click right here to subscribe to our weekly email newsletter.