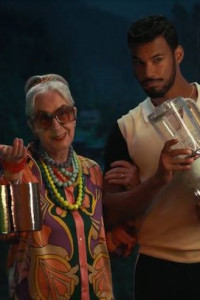 When the power goes off, life goes on. Because Kohler goes on. That’s the statement behind a new 60-second spot created by independent Chicago-based The Distillery Project (TDP) in its first work for the brand.

Beautifully crafted and shot in Vancouver with Radical Media’s Andrew Becker, the :60 version takes the viewer into the heart of a thunderstorm, where a family is suddenly left in the dark. Off go the lights, the fish tank stops bubbling, but within seconds, the lights go back on as the Kohler generator automatically kicks in from its perch beside their home.

Dad fires up a blender in the kitchen, a daughter blasts her hair dryer in the bathroom, the fish tank comes back to life and mom and her young son get back to their video game. Soon, the doorbell chimes and neighbors without power arrive with their laptops, appliances, wet laundry and frozen foods. As the impromptu party heats up, the homeowner adjusts the air conditioner to ensure a comfortable atmosphere.

Everyone is dancing with joy to one of the most iconic dance songs in history, “The Power” by Snap!, a German Eurodance group.

The merriment is interrupted when two police officers, sent to check on citizens, come to the door. But they too are swept up in the excitement and join the revelers inside this cozy port in the storm.

“The power to live boldly” is superimposed at the end with a voiceover: “When you’ve got a Kohler generator, if the power goes out, life rocks on.”

“As extreme weather and concerns about our power grid puts many on edge, we sought to bring a sense of relief and reassurance to homeowners who live in fear of the loss of electricity,” says John Condon, chief creative officer at TDP, “especially as we have come to depend on it to an extreme these days. There is a sense of joy in knowing that with a Kohler generator on hand, life rocks on. And the spot celebrates what that feels like.”

TDP has been named Ad Age Small Agency of the Year three times.