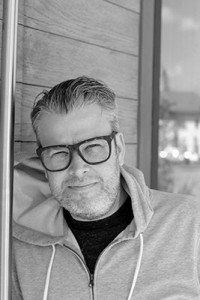 Beverly Hills 90210, Andre3000, and a trip back to the 1994 NBA Finals! We are steeped in 90’s nostalgia as Texas-based charlieuniformtango Executive Producer Keith Munley stopped by for Five Questions with SCREEN…

KEITH: We’ve had a lot of actors and actresses come through the shop over the years for voice over record, or just ADR. It’s a fun day cause I am always curious what they will be like. Some are super nice and some just want to get in and get out. There are surprises and disappointments for sure. When they were filming AMERICAN CRIME here in Austin we did a bunch of ADR for them. The two standouts for me were the amazing Regina King and Andre 3000. Both couldn’t have been nicer and the coolest people in the room. That’s when it gets hard to stay professional and not just want to geek out on them. You just have to find that balance.

KEITH: I should start by saying I’m not an amazing athlete or anything, but I love basketball almost as I much as I love cinema. I’m too short and built like a bunch of G.I. Joe parts were put together to form one body, so my NBA dreams died early on. Despite this, in the 8th grade I made the tying 3 pointer in a city league basketball game against the best team in the league late in the 4th quarter. We ended up losing the game but I felt like John Starks on the Knicks for a few minutes. Players in the NBA didn’t shoot as many 3’s back then as they do today and John Starks actually wasn’t a great 3 point shooter, but he was our guy at the time. Well, until he went 0-11 from 3 in game 7 of the NBA finals. Man, still stings!! Sorry, I’m rambling now. See I told you I love basketball.

[If you need a refresher on that John Starks disaster back in 1994, here you go…]

SCREEN: What activity are you most looking forward to once the country goes “back to normal,” hopefully later this year?

KEITH: I just really want to get back into a movie theater. I miss that whole experience. There is nothing better than watching a film you are excited about on the big screen.

KEITH: I love to cook. I don’t know if I am any good at it, but I really enjoy it. Breakfast has always been my favorite go-to, and having 2 girls, it’s fun to go all out on Saturday morning for them. My hope is that I’m giving them some fond memories when they are older, or it’s training for my second career as the weekday afternoon chef at IHOP. Who knows, only time will tell.

KEITH: Looking back this is probably one of the worst and best jobs ever. One summer in college I worked for a car dealership pulling the tape off the new cars that arrived on the lot. Of course, July and August in Texas things can get interesting real fast. It would get so hot that some of the tape would melt onto the cars and you’d have to pick at small sections for hours to get it off. The best part about it was when it got unbearably hot my buddy and I would sit in one of the giant cargo vans with the AC cranked and listen to talk radio. We would build a pile of trash, in case anyone came by so they could see we had been working and just taking a break.

KEITH: When I was 15 and got my drivers permit a guy named Neil told me don’t let yourself get attached to anything you are not willing to walk out on in 30 seconds flat if you feel the HEAT around the corner. Made sense at the time, but now in my 40’s I think he just needed a hug.

SCREEN: What’s that TV show you’re a little embarrassed to admit you love to watch? Why do you love it?

KEITH: It’s not embarrassing to me, but people always laugh at me cause I love Beverly Hills 90210. The pure unintentional comedy of this perfect high school soap opera is a go-to to just have on in the background for any occasion. Just a great guilty pleasure, and one of the reasons I’m down for other high school melodramas like The OC, Gossip Girl, or most recently Riverdale. I am always intrigued by what ridiculous storyline someone can come up with. Have you seen the episode where Brandon Walsh gets addicted to gambling? Just comedy gold.

And we will wrap up this entertaining round of Five Questions with some of the all-time best moments from the show, enjoy the nostalgia!

Click here for more rounds of Five Questions with Screen!