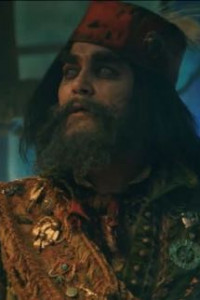 Holding the poor hapless bill collector, Anselm Rodriguez, by the collar (and firmly under his spell), Phillip the Shopkeeper – played artfully by none other than Johnny Depp – spins yarn after yarn about his days sailing the ocean blue and all the harrowing exploits he’s had.

“I’ve had me adventures,” he says, captivating Anselm — played by actor Francisco Rodriguez — with all the treasures of his travels before slyly ushering him towards the door with a final gem of advice: “I see your journey awaits you out there, on the tides. You be brave. Be bold. And eat a proper breakfast in the morning!” And with that wry aside, he tosses Anselm out the door, where he lands dejectedly on the steps, only to be surprised again by Phillip, who pulls him to his feet and sends him out on his own adventure with a cheerful swat on the backside.

So wraps the closing scene of a new four-and-half-minute cinematic trailer created by the advertising and design agency Buddha Jones for the upcoming MMORPG delight “Sea of Dawn.” Working with Spark Marketing Alliance, the entertainment marketing agency Bojue and the global gaming titan Changyou, the agency enlisted the talents of Director David Gil and Quriosity Productions to shoot this epic trailer, which lensed late last year in Santo Domingo.

Here is your first look at the piece…

Based on the 16th century European Age of Exploration, “Sea of Dawn” is a nautical-themed game that taps Unreal Engine to digitally replicate much of the sea-going experience, such as exploring uncharted coastlines, taking on rival vessels, trading with other merchants and delving into far-away cultures, mysteries and mythologies.

Under the leadership of Buddha Jones Head of Games Scott Carson, Executive Producer Jordan Godfrey and Creative Director Steven Robertson, the “Sea of Dawn” trailer takes viewers on a fantastic journey via Depp’s performance, one that’ll keep both gamers and fans of the actor glued to their screens. All creative development, along with post, effects, audio, music and sound design, were handled in-house at Buddha Jones, while the live action shoot was led by Quriosity Productions’ Founder and EP Qadree Holmes.

“Our concept was that Johnny was to play the role of a retired adventurer, and his shop is this wonderful world of curiosities and trinkets, each representing a story from his colorful past,” explained Robertson. “By condensing the action into this complex set piece, we were able to really focus on the character that he created and let his performance serve as the gateway into what ‘Sea of Dawn’ is really all about.”

“Phillip knows that Anselm is a bill collector, so he’s going to dazzle him with all of his quirky tales and fanciful objects, and maybe he’ll forget he’s collecting a debt and be inspired,” adds Carson. “The portrayal and the characterization – the speech, the delivery, the flourishes and gestures – all came from Johnny and his team. For us at Buddha Jones, what was most exciting about this project, aside from working with a star of this magnitude, was the chance to create something new and different, and that’s what this character represents.”

Depp specifically envisioned Phillip as playing against another actor, a friendly foil whose reactions would feed his motivation and who could act as a proxy for the viewer. Robertson noted that Francisco Rodriguez, the actor playing the bill collector, had no idea who he was going to be working with until his costume fitting. He plays off Depp’s character with understated wit and charm.

When it came to the script, the wardrobe and the makeup, Gil explained, “we worked very closely with Johnny and his team, and found them all to be highly collaborative.” Decked out in a tattered fez and dazzling sea-faring attire, courtesy of Costume Designer Jimi Urquiaga, Depp doesn’t so much play Phillip as embody him. It’s a voluminous performance made more special by the setting’s tight quarters and densely layered look.

Carson and Godfrey said Gil was a natural choice for this assignment. “David and I have worked together for over a decade, and I’m a huge advocate for working with people in whom you have a high level of confidence,” said Carson. “And he stepped into this project with just that – a ton of confidence, in both his instincts and his team.” Added Godfrey, “It was great to see the level of respect Johnny had for what David brought to the project. They really connected, and that helped breathe lots of life into the performance.”

“Johnny said early on that everything hinged on the content,” said Gil, who also shot the promotional stills for the trailer. “He loved the script, and he loved the opportunity to create this new character. What we did was create the environment that supported it, and the whole crew really delivered. It felt like we were working with family.” Gil singles out the contributions of his DoP, the award-winning Cinematographer Shelly Johnson, and the work of another award winner, Production Designer Pedro Romero.

An important supporting player was the highly atmospheric set, on which the production team went above and beyond. “They created this amazing playground for Johnny to delve into, and our script had the flexibility to allow him to do that,” explained Godfrey. Built around a circular table and festooned with bizarre and unusual items, the set felt like a character in the story all by itself. There’s even a segment in which an animated diorama appears behind a curtain, adding an even more playful element to the film; conceived by Gil, it was created on the quick by the director’s design team and faithfully executed by his production crew.

Who knows where Phillip’s next adventure may take him? Robertson feels there could be more to this fascinating rapscallion than meets the eye. “We knew going in that Johnny was all about character, and was keen to latch on to something he could make his own,” he remarks. “And I think between the creative and production team we assembled, we were able to provide him with that. Now just let’s see where he goes next!”