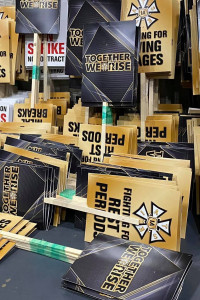 IATSE President Matthew Loeb announced in plain and simple terms where the IATSE/ AMPTP negotations stand, and he did so on his Twitter account this morning…

I am announcing that unless an agreement is reached, 60,000 @IATSE film and tv workers will begin a nationwide strike against the Alliance of Motion Picture and Television Producers (AMPTP) on Monday, October 18 at 12:01 a.m., PDT. #IASolidarity

If a deal cannot be reached with AMPTP by October 18th, then its members will strike. Both parties however will continue negotiations throughout this week.

IATSE President Matthew Loeb said further in a statement, “Without an end date, we could keep talking forever. Our members deserve to have their basic needs addressed now.”

As reported in Deadline, “The Alliance of Motion Picture and Television Producers issued a statement Wednesday in response to IATSE’s strike date, saying, ‘There are five whole days left to reach a deal, and the studios will continue to negotiate in good faith in an effort to reach an agreement for a new contract that will keep the industry working.'”

The Countdown to Monday

The union has started a “strike clock” that you can see here.

And now it simply comes down to the negotiations between union and AMPTP leaders. With Chicago in the midst of a record-breaking year of television production, and with IATSE (aka the International Alliance of Theatrical Stage Employees) representing over 140,000 technicians, artisans, and craftspersons in the entertainment industry, any sort of labor discord or halt could have a massive impact on the Illinois industry and economy.

It is important to note the current national contract negotiations impact the Film & TV industry, excluding paid TV agreements with HBO, Starz, Showtime, and the IATSE National Low Budget Agreement.  It does NOT impact the commercial advertising industry which operates under a separate AICP negotiated contract.

What IATSE Is Asking for from AMPTP

Here is IATSE’s initial statement, outlining the conflict at hand. “After months of negotiating successor contracts to the Producer-IATSE Basic Agreement, and the Theatrical and Television Motion Picture Area Standard Agreement, the Alliance of Motion Picture and Television Producers (AMPTP) announced it does not intend to make any counteroffer to the IATSE’s most recent proposal.

Check back here at SCREEN Magazine for updates in the days ahead.