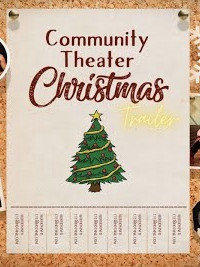 Writing, producing, and shooting a feature film in less than a month is quite a feat. But that’s exactly what happened.

“We wanted to do something silly and we wanted all of our friends to be involved,” Melissa Vitello, co-writer and director of COMMUNITY THEATER CHRISTMAS shared. “It really started with doing an outline of a character that would fit all of our friends.” Here is more from my chat with Melissa… by the Christmas tree, of course:

One night, Melissa and her husband, Bryan Ricke, took the outline and stayed up all night at a bar and wrote the script. This was the third feature film for the couple, who have their own production company.

After directing COMMUNITY THEATER CHRISTMAS, quarantine changed the landscape of the film. Ultimately, their film was acquired by Cow Lamp Films. “We were fortunate to find Cow Lamp. They really loved the film and saw potential in it and were collaborative,” Melissa shared.

They recently did a collaboration with Chicago restaurant, Goddess and The Grocer, for a Holiday Cocktail Giveaway.

COMMUNITY THEATER CHRISTMAS is now available to stream for free on Crackle, Tubi, Amazon Prime, and Vudu. Click here to enjoy it over the holiday weekend.

What’s Next for Melissa

Melissa has a lot on the horizon. She’s partnered with a couple of producers and will be launching a female-forward horror production company. Check back here at Screen for more from Melissa in the year ahead.