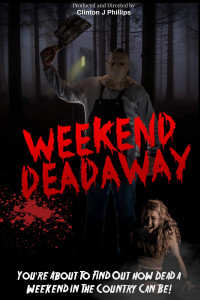 There is a slasher flick in the works in the Chicago and Illinois suburbs this month. Writer-director Clinton J. Phillips and his production company Three Feathers Films are bringing the thrills and chills with Weekend Deadaway, which will be the first full-length feature film for Phillips. Production is currently underway in Joliet and surrounding townships, having broken ground on June 12th and filming into early July.

In Weekend Deadaway, a couple of city hipsters feel like they are just working their lives away and have forgotten how to enjoy life. After much consideration, a tight group of friends decide to take a weekend retreat to a rental cabin out in the countryside. Little did they know that life as they knew it was forever to be changed.

While on the weekend getaway, they are able to enjoy many of the property’s amenities, which include off-roading, fishing, nature trailers, star gazing, and just simply enjoying the peacefulness it has to offer. But in the middle of their trip they realize things are quite different than what they had expected.

As Phillips declared in a recent interview that follows below, “when you work hard, you tend to play hard, and for a couple of city hipsters, they’re about to find out how dead a weekend in the country can be.”

Here is a bit more about Weekend Deadaway from an interview of director Clinton J. Phillips and his wife and one of his producers, Ashley Phillips, brought to you by Tribe3 Productions…

Illinois Cast and Crew Through and Through

The ensemble cast is led by Chicago actor Nickie Kruszynski and Joliet actor Julio Alexander as Hunter and Ryder, the carefree couple at the center of this horror thriller. As for the team supporting Phillips behind the camera, he is joined by Assistant Director Ali Mango, Stunt Coordinator Brian Christensen, and Director of Photography Gabriel Jung.

Phillips’ goal is to bring audiences a horror film with a fresh, intense and an on the edge of your seat feel that’s sure to scare. His target is to have the film on screens in time for Halloween this October.