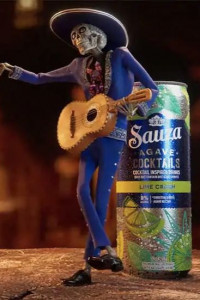 It’s time to get busy living! So says Sauza in its latest campaign, alongside its newly announced agency of record, Chicago-based Highdive. Highdive has grabbed its first spirits client, having been chosen as the creative agency of record for five Beam Suntory brands. The brands include three small batch whiskeys in the James B. Beam whiskey portfolio, plus Sauza Agave Cocktails, according to AdWeek, who initially announced the partnership.

The collaboration officially kicked off with the launch of Sauza Agave Cocktails’ “Get Busy Living” campaign. The fun, animated social spots feature a guitar-playing skeleton character, Don Esqueleto. In the first spot, he states that he hears that the Sauza Agave ready to drink cocktails are delicious, but he can’t taste them, because he’s dead. It’s tagged with the “get busy living” line, which is a good bit of fun coming from a dead character.

According to AdWeek, the agency approached the work in a digital-first way – looking for the character – and utilized Sauza’s mission that the tequila brand was created to be a symbol of Mexican culture, full of deep connections and bonding moments. The agency used that product truth for the launch of Sauza Agave Cocktails.

Mark Gross, co-founder and co-chief creative officer at Highdive, told AdWeek that the agency intends to do 10 social spots with the skeleton—and that the agency is currently working on some experiential stunt work for the brand.

The win is one in an extended string of victories for the Chicago-based agency. The aforementioned Adweek named Highdive the 2020 Breakthrough Agency of the Year. Highdive also serves as AOR for Jeep, and has executed some of the most popular Super Bowls ads over the past three years.

Here’s a look at the most recent Highdive-Jeep collaboration…

“They appreciate great work, they really know their brands in and out. They’re such experienced marketers—and that’s what’s made it so terrific to work with them and get great work out,” Gross told AdWeek.

“The choice to bring Highdive on as our AOR was an easy decision,” said Jon Marks, senior brand director, global small batch at Beam Suntory in a statement. “The tie between the strategy and the creative was so strong and well connected, we knew immediately that Highdive is the ideal partner to help us achieve our goals and amplify our brand.”