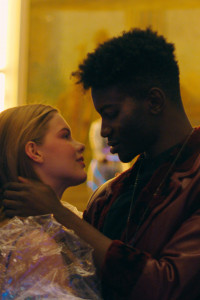 The dynamic duo of director-actor Sadie Rogers and producer Grace Hahn has much to celebrate this week as their stunning sci-fi short film HOW IS THIS THE WORLD? releases worldwide this week on DUST, the popular sci-fi platform powered by Gunpowder & Sky. This Chicago-made award-winning drama has already attracted over 50,000 views in just under 24 hours. SCREEN spoke with Rogers about the film, which you can watch right here…

In HOW IS THIS THE WORLD, a mother befriends a burnt-out hacker to help search for her son in virtual reality. Here is the 15-minute piece in full, courtesy of DUST on YouTube:

“Originally the short was a sort of metaphor for addiction, for seeking out safe spaces in a world that isn’t always the healthiest and kindest to teens and young adults,” director Sadie Rogers told SCREEN. “I’ve noticed in our screenings at festivals that most folks are relating it to a sort of doom metaphor for the addiction of digital technology as a whole. I think it’s cool that people are taking different themes from it. Overall, I hope viewers will connect with the mother’s journey.”

The film enjoyed an impressive festival run, premiering at Sarasota Film Festival before winning Best of Fest at Dayton Independent Film Festival and the Best Female Director award at MINT Film Festival this past year. “As a filmmaker I have learned an incredible amount from making this film with this team,” Rogers (pictured here) explained to SCREEN. “I partnered with producer Grace Hahn and we brought on Eon Mora, my friend and an amazing cinematographer to shoot this project. They were both so integral in seeing the vision through to the end and, with them, we found an amazing production team. This film was my ‘learn how to use visual effects’ crash course and just about everything went wrong in the beginning and I couldn’t be more thankful for those lessons and for the team (shoutout to Troy Lewis, our amazing post production supervisor) that stuck with me through rebuilding our effects and I love where they are now.”

Next up for Rogers and Hahn is the feature film HEART OF THE TREPID, which is expected to shoot later this year. Click here to follow @heartofthetrepid on instagram and check back here at SCREEN for updates as this duo heads into production on their feature.