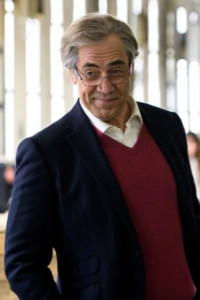 Chicago’s Gene Siskel Film Center will present its 25th Annual Chicago European Union Film Festival (CEUFF), from Friday, March 4 through Thursday, March 17. After a COVID-truncated 2020 festival and a scaled-down, virtual festival in 2021, CUEFF returns for its 25th year as a curated, two-week, in-person festival bringing the vibrant cultures of Europe to life through 19 new films from 20 EU member nations. The festival will feature 11 feature film debuts, 12 films directed or co-directed by women, and several (virtual and in-person) director appearances.

Here is your first look at LOST ILLUSIONS…

CUEFF continues with the Chicago premieres of the Oscar-shortlisted PLAYGROUND (Belgium); the fresh-from-Sundance shocker HATCHING (Finland); the visually spectacular BERG (Netherlands) and AS IN HEAVEN (Denmark); and the thoughtful and provocative documentaries THE JUMP (Latvia) and BLOOM UP: A SWINGER COUPLE STORY (Italy). Closing Night celebrates another premiere with Spain’s satirical and clever THE GOOD BOSS, directed by Fernando León de Aranoa and starring Javier Bardem, here’s your first look at the film…

“International cinema has always provided a window to the world – introducing audiences to new ideas and perspectives,” says Film Center Director of Programming Rebecca Fons. “After two years of limited (or nonexistent) travel, the canceling of planned adventures, and the experience of being globally connected only through the COVID-19 crisis, the CEUFF lineup provides a much-needed infusion of  international stories, cultures and attitudes. 2020 CEUFF was cut short mid-festival. It is our pleasure to welcome it back in an updated format, as a two-week, focused slate of Chicago premieres, anticipated titles, and hidden gems.”

“The Chicago European Union Film Festival is where many people first discovered the Film Center and fell in love with international cinema,” says Jean de St. Aubin, Executive Director of the Film Center. “Over the past 25 years it has grown to become a favorite of the Film Center audience, and we are delighted to once again invite you to join us as we cinematically travel throughout Europe.”

The 25th Annual CEUFF by the numbers:

Individual tickets to the 25th Annual Chicago European Union Film Festival are available for purchase starting Friday, February 11, at 11:00am.