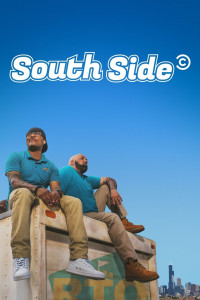 SOUTH SIDE is back! The critically acclaimed series and ratings champ will begin shooting its second season in Chicago this Monday. The highly anticipated second season is expected to film through at least July.

While SOUTH SIDE is returning home to shoot in Chicago, the series has a new home on the small screen… HBO MAX. As part of a deal announced between Comedy Central Productions and the streaming service, the first season of SOUTH SIDE, which filmed in 2019, will become available on HBO Max in 2021, with the second season, which is about to begin filming next week, slated to debut exclusively on HBO Max instead of Comedy Central. So while Comedy Central will still be part of the creative and production team for the show, the second season will be exclusive to HBO Max, making the series a “Max Original.”

Created by Bashir Salahuddin, Diallo Riddle and Sultan Salahuddin (all of whom also appear onscreen), South Side centers on two friends (Sultan Salahuddin and Kareme Young) working at a rent-to-own store in the Englewood neighborhood of Chicago while dreaming of bigger things. The cast also includes Chandra Russell and Bashir Salahuddin as two beat cops who patrol the area, and Quincy Young (Kareme’s twin brother) as the manager of Rent-T-Own.

“South Side is a truly unique and special show — one that is first and foremost incredibly funny, but also redefines perceptions of Chicago through storytelling and humor,” said Jonas Larsen and Sarah Babineau, co-heads of original content for Comedy Central. “Diallo, Bashir and [director/executive producer Michael Blieden] have created such an incredible comedic world with this show, and we can’t wait to see what they have in store for season two.”

“These ground-breaking and hilarious programs are cultural touchstones and we are excited about the diverse group of comedic voices they will bring to HBO Max. We know our audiences will want to watch again and again,” said Michael Quigley, executive vice president of content acquisitions at WarnerMedia, regarding HBO MAX’s acquisition of SOUTH SIDE and another Comedy Central product, THE OTHER TWO.

Looking Back to Season One and Ahead to Season Two

Back in 2019 when Season One of SOUTH SIDE premiered, the show was Comedy Central’s highest-rated new series among African-American adults under 50 since Key & Peele‘s first season in 2012. It was also the top-rated new cable comedy of 2019 among African-American men 18-49, and among all 18-49 viewers, it improved its time period by double digits year to year.

Here is quick jump back to 2019 to enjoy the trailer for Season One:

Executive producers for the second season include the afore-mentioned co-creators Diallo Riddle and Bashir Salahuddin, as well as Michael Blieden. Line Producer is Wileen Dragovan, whose past credits include the shot-in-Chicago MTV series UNDEREMPLOYED.

Check back here at Screen as SOUTH SIDE forges ahead into production next week and on into the summer.