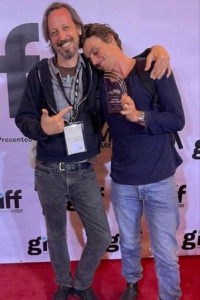 It’s always great to open your festival run with a win. And Michael Glover Smith’s fourth film, Relative, did just that. The dramatic feature, which was shot in Chicago last summer and produced by Brian and Jan Hieggelke’s Chicago Film Project, had its World Premiere at the 15th Annual Gasparilla International Film Festival in Tampa, Florida on Saturday, March 12. Cameron Scott Roberts, who plays “Benji Frank,” the youngest child of a large family and the character whose college graduation party the film revolves around, won the festival’s Grand Jury Award for Best Performance. Roberts is also known to fans of The Walking Dead for his portrayal of “Tyler Davis” in the popular AMC series.

“Working with Cameron on RELATIVE was one of the great artistic pleasures of my life,” Smith shared with SCREEN. “We originally cast him in 2019 when he was fresh out of DePaul’s Theater School and the fact that the shoot was delayed until 2021 really allowed him to spend time with the character and helped to deepen our director/actor relationship. It was amazing to premiere at Gasparilla with so much of the cast and crew present. We all felt a lot of love from the festival and from the city of Tampa. Cameron winning an award at the end was just the icing on the cake of a fairy-tale weekend.”

Roberts relayed his own surreal experience of attending the premiere literally hours after wrapping an episode of The Walking Dead: “I had just wrapped filming in Atlanta at 3pm, and I was almost certain that I wouldn’t make it to Tampa by the 7:30 screening. Somehow all the pieces fell into place, and I rolled up (literally…with my suitcases) to the premiere at 7:28pm. So I was just happy I got to see the movie. Then cut to 24 hours later, and we were sitting there for the awards ceremony (which I didn’t even know was a thing), they called my name for best performance, and all I could do was laugh hysterically. We had all just done a shot of whiskey, and the shot started kicking in as I walked to the stage. Our Relative team was cheering for me, and I didn’t stop laughing… that was the most surprised I’ve been in a very long time.”

A Chicago Film Through and Through

Click here for more exclusive photos from the set of Relative.

RogerEbert.com’s Matt Fagerholm called Relative “an impeccably cast, superbly directed and utterly captivating ode to the spontaneity and resilience of human connection.” Relative’s festival run forges ahead next month with multiple screenings at the Julien Dubuque International Film Festival. Details of the Chicago Premiere will be unveiled soon.