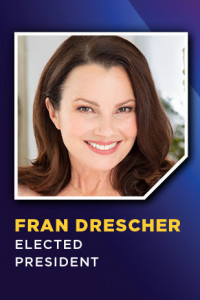 From The Nanny to the President. SAG-AFTRA members have elected The Nanny star Fran Drescher president and Golden Globe nominee Joely Fischer secretary-treasurer. Their two-year terms began immediately upon the certification of the ballot count late Thursday.

“I am honored to serve my union in this capacity. Together we will navigate through these troubled times of global health crisis and together we will rise up out of the melee to do what we do best, entertain and inform,” said Drescher in a statement. “We must never forget the important contribution we make to many millions of people each and every day when they buy a ticket to sit in a dark theater or turn on their TVs or streaming devices.”

Drescher added: “Our chosen professions within the SAG-AFTRA membership have literally gotten Americans to laugh, to learn, to momentarily escape that we are all in a pandemic. We members serve an invaluable purpose in the grand scheme of things. We must never forget who we are and what unites us as one union.

“Today marks the beginning of a fresh start, let us forge forward in a holistic and non-partisan ascension towards the precipice of a new dawn. Only as a united front will we have strength against the real opposition in order to achieve what we all want: more benefits, stronger contracts and better protections. Let us lock elbows and together show up with strength at the negotiating table! If you voted for my opponent, I want you to know we were never far apart in our objectives. I promise you, if you give me the chance, I will listen to you and fight like hell to give you what you have been wanting. And may we all continue to shine a light on all the worried viewers across the nation and around the world with our talents.”

“To our members, I want to thank you for your vote of confidence. I look forward to getting us back to solid financial footing and to be a part of strong negotiations moving forward,” said Fisher. “It is bittersweet that my running mate, Matthew Modine, won’t be by my side, but I will work to uphold our vision of bettering our union. I will hold Fran Drescher to her promise to us to protect the members and put more money in our pockets through stronger contract negotiations.”

SAG-AFTRA National Executive Director Duncan Crabtree-Ireland congratulated Drescher and Fisher on their elections, saying “I look forward to working closely with Fran Drescher and Joely Fisher as they assume their positions at such a critical moment in our union’s storied history. We have an extensive agenda to pursue on behalf of our members and, with President Drescher, Secretary-Treasurer Fisher, the rest of our National Board and a deeply talented team of local leaders, I am confident we will marshal the energy, initiative and focus to improve the lives of SAG-AFTRA’s membership. I also want to thank the thousands of SAG-AFTRA members who cast a vote in the election, because participation in the democratic process is the ultimate endorsement of the confidence placed in the union’s leaders and staff who work every day on behalf of performers.”

Drescher rose to international stardom for her portrayal of The Nanny, which she also co-created and executive produced.

Take a leap back to the 90’s and enjoy the pilot episode of The Nanny:

The multi-award-winning and nominated actress/comedienne Drescher founded the non-profit Cancer Schmancer to educate and empower people after she survived cancer. As an advocate, she has been responsible for unanimous passage of a bill in Congress, has made multiple trips to Capitol Hill to lobby for health issues, and was appointed Public Diplomacy Envoy for the U.S. State Department during the administrations of Presidents Bush ‘43 through Obama ‘44. Currently she is writing the book for the theatrical musical The Nanny and returns to voice her role in Hotel Transylvania 4. She will also portray Kat Dennings’ mother on Dollface in its upcoming second season.

With her election, Joely Fisher continues a family tradition of union service, a path blazed by her mother, Connie Stevens, who served as secretary-treasurer for the Screen Actors Guild. Beginning in 1994, Fisher played the role of Paige Clark in Ellen, for which she received a Golden Globe nomination for Best Supporting Actress, Series, Mini-Series or Television Film. Her extensive film career includes multiple television and film roles, including Inspector Gadget, Growing Pains, Grace Under Fire and The Outer Limits. She has also appeared on stage in Cabaret and Grease.

The executive vice president, as well as the seven category and geographical vice presidents, will be elected by delegates at SAG-AFTRA’s biennial convention, which will be held October 15–18 and take place virtually to ensure the safety and health of all delegates.

A complete list of results of National Board and local elections can be found by clicking here.