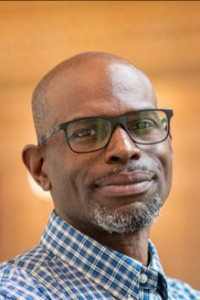 One of the anchors of the Chicago production community is heading east. Kwame Amoaku, who resigned from his position as Director of the Chicago Film Office earlier this month, appears to be on his way to New York. Will Amoaku be heading up the film commission out there? Will he be spearheading a film and television production company? Sources tell SCREEN both of those options are possibilities and we expect to hear a definitive public announcement from Amoaku in the weeks ahead.

One thing is certain. Kwame Amoaku will be missed in Chicago.

Amoaku announced publicly on social media today that “Thursday is my last day in Chicago. My heart will never leave…Chi till I die. I’m moving to NYC for an exciting opportunity. I will miss you all so much. Thank you for three decades of love and support. Southside fo life.”

A True Chicagoan Through and Through

Earlier this month, when Amoaku stepped down as Director of the Chicago Film Office on June 3rd, he had posted the following to his Facebook page…

I have been a proud member of the Chicago Film Community for almost 30 years. This community is like a family to me. I grew up here and I have worked with many of you for most of my career. I love this city, all of it from Howard to 127th street. I remember the first job I ever worked. It was PA on a music video with Maria Roxas producing and Rakim Jihad directing. From that moment on I was all in. That started a journey that took me all over the world and finally back here to step into the huge shoes of Rich Moskal.

Mayor Lori Lightfoot and Commisioner Mark Kelly welcomed me into the DCASE family in July of 2019 where I met an amazing group of public servants whose sole purpose was to bring joy and culture to the people of Chicago. Over the last three years I am proud of the progress growth I have witnessed. I am proud to have been a part of the awesome success we have had here.

As Director of the Chicago Film Office, Amoaku guided the city’s production community through the most stunning growth of its history. Those efforts capitulated in the recent State of Illinois announcement that the state, due in large part to the TV and film boom in Chicago, had shattered records with $630 million of economic impact in 2021.

More specifically, Amoaku and his team at the Chicago Film Office tallied numerous successes, which include:

• Worked with State and City Health Departments to get COVID guidelines that allowed film to be declared essential manufacturing in Chicago allowing us to return to work quickly during the pandemic.

• Creating a workforce development program to expand employment opportunities to underserved areas of the city.

• Worked with developers to get two new purpose built infrastructure online by 2023 and working with existing providers to expand capacity.

Earlier this month, Kwame concluded his public statement to friends and fellow Chicagoans with, “Those of you that know me know I have been through many personal challenges over the last few years. I want you all to know that the support that I have received from this community has been a truly a blessing that I am beyond thankful for. I took this job because I wanted to give back to a community that has given me so much love. I hope that I was able to do that in the short time that I was here.”

As for the Chicago Film Office, Deputy Director Betsey Grais is leading the department while the CFO conducts its search for a new leader.

Please check back here at SCREEN Magazine for breaking news and updates as to Amoaku’s upcoming endeavors in New York City. You can also click right here to subscribe to our weekly email newsletter.

Until then, thank you once again, Kwame, for your tireless service to the Chicago television and filmmaking production community.