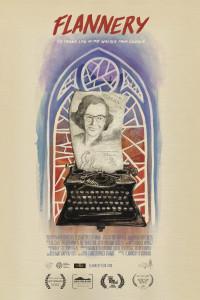 Winner of the first-ever Library of Congress / Ken Burns Prize for Film, FLANNERY is the lyrical, intimate exploration of the life and work of author Flannery O’Connor, whose distinctive Southern Gothic style influenced a generation of artists and activists. Including conversations with those who knew her and those inspired by her (Mary Karr, Tommy Lee Jones, Hilton Als and more), FLANNERY employs never-before-seen archival footage, newly discovered personal letters and her own published words (read by Mary Steenburgen) alongside original animations and music to examine the life and legacy of an American literary icon. You can enjoy FLANNERY today on PBS Passport or Amazon Prime, but first! FLANNERY Co-Director Elizabeth Coffman (shout out to fellow co-director is Mark Bosco) stopped by for Five Questions with SCREEN…

SCREEN: If you could only give us one quote from Flannery O’Connor, what would it be?

ELIZABETH: “She looked at nice young men as if she could smell their stupidity.”

SCREEN: You worked with several celebrities while filming FLANNERY. What is your favorite moment from those interviews?

ELIZABETH: Tommy Lee Jones – when I was nervously taking the microphone off of his shirt, I said, “Thank you. Thank you” in a lilting voice that he promptly imitated with, “You’re welcome. You’re welcome.” Also, every moment with Mary Steenburgen was enjoyable.

SCREEN: You spent some time at Loyola Chicago. What was your favorite restaurant up there on the Far North Side?

ELIZABETH: Dak on Granville stop really rocks it with their Korean Chicken Wings or Veggie Bibimbap.

[Editor’s note: click here to order those wings from Dak on Grubhub if Elizabeth has your tastebuds rolling]

SCREEN: Do you play any musical instruments? If you could play us all one song, what would it be?

ELIZABETH: I play nothing – a big regret. I used to sing in the church choir. They would ask me not to sing so loudly since I was usually off-key. While researching Georgia music for FLANNERY I discovered Brenda Lee. If you’ve never heard her song “Dynamite” which Lee recorded when she was 12, you are missing part of rockabilly history.  I sing it off key around the house a lot.

Here it is, an epic recording of Dynamite by 12-year-old Brenda Lee…

ELIZABETH: Working as a receptionist in a trucker’s warehouse.  The truckers were nice.  I had to work at being “smiley” all the time.

ELIZABETH: Masterpiece Theatre.  Because what else do English majors and lovers of Victorian literature watch?

SCREEN: Why should everyone set aside some time this week to enjoy FLANNERY?

ELIZABETH: To get to know a smart, funny writer who – as Mary Gordon, one of our interview subjects says – “is one of the five or six writers in the history of the world who is least afraid to look at the darkness.”