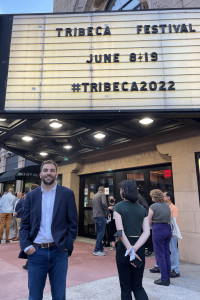 The investor collective Chicago Media Angels has supported quite a few Illinois independent features in recent years, including SXSW pick Come As You Are and critics’ picks Once Upon a River and Killing Eleanor. Today, one of the co-founders of CMA, Mark Glassgow, stopped by SCREEN to have some fun with a thoroughly entertaining and insightful round of Five Questions. Let’s get to it!

SCREEN: Ok Mark, you are immersed in the independent film world, so give us one indie we should add to our streaming queue this week!

MARK: I just rewatched Ali Abassi’s Border on Hulu —  one of the great films of this generation in my opinion. Rarely does a film pull off a high-concept genre so well, while also having such sincerity and heart. Every department on the film is working at the highest form of their craft – Writing, Acting, Locations, Wardobe, Makeup.

MARK: In high school, I sanded and re-painted rusted urinals and urinal dividers for a few weeks as part of a job. Financing and producing movies is much more fun.

SCREEN: When you and the team at Chicago Media Angels are considering a film for investment, what’s the one biggest factor that tends to sway you one way or the other?

MARK: I love investing in people who consider themselves entrepreneurs first and foremost, because that is really the heart of independent film. Being a producer means running a business –  in which you will hire and manage dozens of people who are all working under immense pressure towards a collective goal.  A producer can have incredible artistic talent, taste, craftsmanship, etc. but if they aren’t reliable and accountable it’s hard to want to invest in them.

SCREEN: If you could be a member of any musical group in history, what would it be?

MARK: Weird answer but I always fantasize about being Kevin Shields’ guitar tech for My Bloody Valentine. An unlimited budget to spend on gear. It’d be a hard job though.

Ok Mark, this music video from My Bloody Valentine is for you!

MARK: I have a modified Fender Blues Jr. that I inherited from a relative that I really love, and my neighbors really don’t love.

MARK: I do cook! I love making chimichurri sauce and grilling a steak, that’s probably the go to.

SCREEN: If you could only be a fan of one sports team, what would it be?

MARK: The British show Naked Attraction. It’s like The Bachelor for naked people.

And here is the raciest trailer in the history of Five Questions with SCREEN!

Thanks for playing, Mark! For more from Chicago Media Angels, click right here.

Check back here at SCREEN for a new round of Five Questions each week. And you can also click right here to subscribe to our weekly email newsletter.