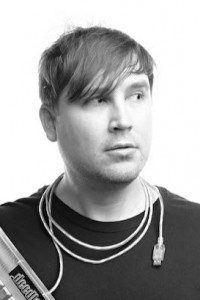 What do Michael Jordan, Garth Brooks, and Bob Barker have in common? They’re all right here as charlieuniformtango Owner and Senior Editor Deedle LaCour stops by for a thoroughly entertaining round of Five Questions with SCREEN! Let’s get to it!

SCREEN: Deedle, Who is the most famous person you’ve ever met?

DEEDLE: Dave Grohl of Nirvana and Foo Fighters. I interviewed him at his office for a documentary film I was producing about the punk rock band Descendents. He was an hour late and hung over because he had just finished a film he was working on (Sound City) and they hit it hard at their wrap party the night before. He showed up with a bag of McDonald’s and was a sweet heart.

SCREEN: If you could be a contestant on any game show in television history, what would it be?

DEEDLE: The Price Is Right, Bob Barker era. I grew up watching and still love it. I want to spin that big wheel!

DEEDLE: My favorite of all time is the Jordan vs Bird “Nothing But Net” McDonald’s commercial. Two legends having fun. The final swish sound to end it over the logo is perfection…

Since I’ve been in the business, my favorite is the Geico “Caveman” spot where he’s on one of those combative Fox News type shows where the talking heads argue the whole time. The line “sounds like someone woke up on the wrong side of the rock” and then the caveman’s reaction is the best 5 seconds ever in a spot. I’ve said that line countless times to my wife and kids over the years.

All right, Deedle, here is that best five seconds ever, enjoy!

DEEDLE: I’m not really sentimental on possessions but I’ve always been entrepreneurial and owning small businesses ranks pretty high. But if I had to name a possession, it’s my wife’s 1993 Fender American Standard Telecaster that I stole from her when we were in high school.

DEEDLE: Putt Putt Golf and games when I was a teenager. In Texas, back in the ‘90s, they had some kind of loophole where a company could work you 7 hours without a break if you were in the entertainment industry. So, I’d work a 7 hour shift with no break or food. I loved arcades growing up and that ruined them for me.

DEEDLE: I made a select club soccer team when I was 13 years old. Then I got a guitar and the rest is history.

DEEDLE: I mean, it’s hard to beat the golden rule. Also, “Thou shalt not allow anything to deter you in your quest for ALL.”

Thanks for playing, Deedle! Check back here at SCREEN for a new round of Five Questions each week. And you can also click right here to subscribe to our weekly email newsletter.

And click here for the latest and greatest from Deedle’s team at charlieuniformtango.