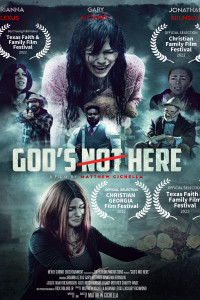 God’s Not Here is a faith-based anthology consisting of four stories about faith, love and most of all, forgiveness. Currently makes its rounds on the film festival circuit, God’s Not Here has not only already won the “Best Young Filmmaker” award at the Texas Faith & Family Film Festival (hosted by TV’s Superman, Dean Cain), but has also been selected to screen at the Christian Georgia Film Festival and the Christian Family Film Festival, which is one of the largest Christian film festivals in the world.

Here is your first look at God’s Not Here…

Originally God’s Not Here started out as a short film, where writer/director Matthew Cichella tried to tackle the question people are constantly asking, “where is God? Why isn’t he doing something?” but through the writing process it became very clear to Matthew that this story was much bigger than he anticipated and that the movie really does need to dive deep into the question of where is God during all of the bad times in our lives. God’s Not Here tries to answer that question once and for all.

God’s Not Here is written and directed by Matthew Cichella. This is his third feature film to be released. His previous works, Poetic and Without Grace are currently available on streaming services worldwide including on Vudu, Amazon, Tubi, etc.

When asked why he was making a faith-based film during a time where people are extremely divided  on the perspective of religion, Matthew replied, “I never said this was a religious movie. I am making a movie based about faith. Faith in God, faith in love, faith in humanity and the compassion in others. I believe these are stories the world needs now, more than ever. It doesn’t matter if you believe in God, or if you follow a certain religion, or what side of the political fence you fall on, as long as you are willing to open your heart to the possibilities of human kindness and forgiveness, there is something for you in this movie. In the end, that is all faith is meant to do. It’s meant to bring us together and I am hopefully this film can do just that.”

“God’s Not Here simply shows a realistic view of the world and where God’s place may be in that world,” Cichella declared to SCREEN. “In this current political, divided world, a lot of people are either questioning where God is during all of this, or whether He even exists or not. I felt like with the God’s Not Here film it was important to face that topic head on.”

Tough Road But a Fulfilling Road for Chicago Actor

God’s Not Here stars Chicago actress Arianna Lexus in her debut lead role. Arianna Lexus stars in the film portraying her range and depth by playing four different characters in four separate stories of faith, love, loss, hope and forgiveness. The production team shared with SCREEN that “Arianna was inspired to help tell these stories that are relatable, real, raw, emotionally driven and just absolutely powerful in every way! If the challenge of playing four characters wasn’t enough, Arianna was tested in real life when she caught COVID in December. She was hospitalized for 120 days with endless complications and there were times where she almost lost her life. It was then that her faith was truly tested on every level.”

According to the production team, “Upon viewing the film, Arianna cried happy healing tears and it was even more special to her than she ever could’ve imagined. It was such a beautiful moment because the impact that trauma had on her life allowed her to not only appreciate every word in the sermon, but completely understand its profound meaning! Her performances are going to make you ‘feel’!”

The faith-based film was produced by Matthew Cichella, Arianna Lexus, and Zackary Richmond, in association with Richcolor Productions.

Three New Projects in the Works for Cichella and His Team

It is shaping up to be a busy second half of the year for Matthew Cichella and his producing partners. Cichella spoke with SCREEN about three feature films currently underway are we forge ahead into Summer and Fall.

“My favorite saying is ‘work never stops,'” Cichella shared with SCREEN. “I say that because I never stop working. I live and breathe filmmaking. It is my passion for life and my reason for existing. I am currently in post-production on two films, and actually in principal photography another as we speak. First up, premiering later this fall will be a dark thriller-esque faith-based anthology called Trial by Faith. Unlike God’s Not Here, Trial by Faith is not inspirational or heartfelt. It’s a dark look at the other side of religion and its followers. But beyond that, I am very excited to be currently filming A Testament of Faith: God’s Not Here II. I knew immediately upon finishing the first film, not only was there still more story left to tell, but that the film is just so good, I had to jump back into that world as soon as possible. There is nothing like telling these uplifting stories, especially in a time where the world needs them most.”

Cichella’s third project in production is Hyde Out, which is targeting an early 2023 release. “Hyde Out is a psychological thriller that centers on domestic abuse and really brings the horrors these women go through to the front and center,” Cichella shared with SCREEN. “It is a home invasion film with a major twist where sometimes what is most dangerous isn’t who is trying to get in your home, it’s who is already inside. That project is one that myself, as well as Arianna Lexus (the aforementioned producer and the lead in God’s Not Here) have been working on for well over a year now. I look forward to discussing that film more in the future as it is the largest project my company, Never Submit Entertainment, has done to date and is one I think people are going to be very surprised by.”

Up next will be the aforementioned two Red Carpet screenings in Northwest Illinois, in Rockford July 23 and Naperville July 26th. Click here to purchase your tickets to the Rockford and Naperville festivities.