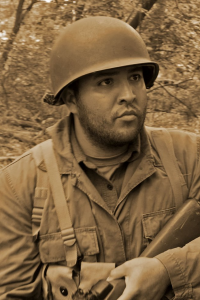 An Infantryman from Hero Street, the fourth episode in the Hero Street documentary series, tells the true story of Pvt. Joseph Sandoval who was born in a boxcar to Mexican immigrants in the Silvis, Illinois rail yard. In 1944 Joe, married with two young sons, was drafted and shipped to Britain with the 41st Armored Infantry Regiment.

Joe’s unit helped fight the second stage of the Normandy Invasion in France. In April 1945, the Allied forces reached an agreement regarding post-war Germany, and he and his fellow soldiers were told the war was essentially over. Joe was killed just days later during a German counter attack near the Elbe River in Schönebeck, Germany. In the two weeks that followed, U.S. and Russian troops shook hands across the Elbe, and Adolph Hitler committed suicide.

The Crooked Cactus Band will perform for premiere guests beginning at 1 p.m. on the day of the premiere. The film starts at 2 p.m. and will include a special tribute to Veterans by Navy Veteran Brian Munos, an encore screening of the award-winning documentary Riding the Rails to Hero Street, the premiere of An Infantryman from Hero Street and Q&A with film participants.

Tickets are available at Putnam.org.

Only a block and a half long, Second Street in Silvis, Illinois lost six young men in World War II and two in the Korean War, more than any other street in America. Hero Street, as it is now known, has provided over 150 service members since Mexican-American immigrants settled there in 1929.

The Rundles won multiple Emmys at the Mid-America Emmy® Awards show in St. Louis Saturday evening. Jean Seberg: Actress Activist Icon garnered an Emmy for the Rundles and the film’s co-producer Garry McGee in the Historical Documentary category. Fourth Wall Films also received an Emmy for the short museum film “Remembering Forest Grove” in the Education category. Both films had their broadcast premiere on WQPT-PBS.

An Infantryman from Hero Street was funded in part by a grant from the Illinois Humanities, with support from the National Endowment for the Humanities (NEH) and the Illinois General Assembly; a grant from the Moline Foundation; and, through its fiscal sponsor the Black Box Theatre, a Quad City Arts Dollars grant provided by Illinois Arts Council Agency, Hubbell-Waterman Foundation and John Deere.

Sponsors for this special premiere event are Jennie’s Boxcar, Fred and Ethel’s, and The Beiderbecke Mansion Bed & Breakfast.Fourth Wall Films is an award-winning and Emmy® winning independent film and video production company formerly located in Los Angeles, and now based in Moline, Illinois. For more information visit HeroStreetMovie.com.

Be sure to check back here at SCREEN Magazine for the latest in independent film production. You can also click right here to subscribe to our weekly email newsletter.